A Weekend in Barcelona

Over two days, Alessio and I immersed ourselves in Barcelona’s architecture, art, athletics, and more. 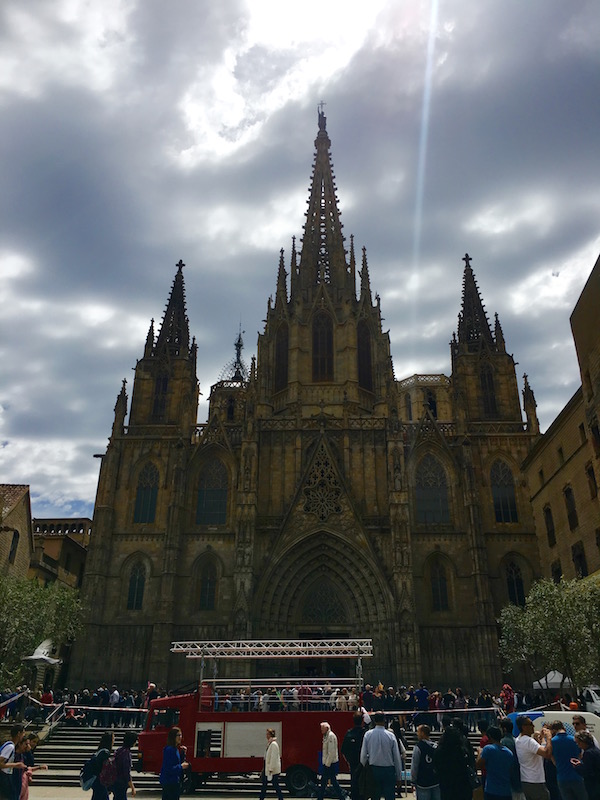 The Cathedral of Barcelona was our first architecture stop of the day, totally by accident. Neither of us had visited Barcelona before, and we failed to brush up on our Spanish architecture before setting out to find the Sagrada Familia. With our lack of knowledge, mental pictures, or cellphone data, we came across a huge crowd looking at a beautifully grand cathedral and wondered if we’d made it to the Sagrada Familia. (Oops!) Fortunately, we did realize it was not the legendary basilica (although it is stunning and legendary in its own way), and continued our adventure through Barcelona onto the next architectural wonder. 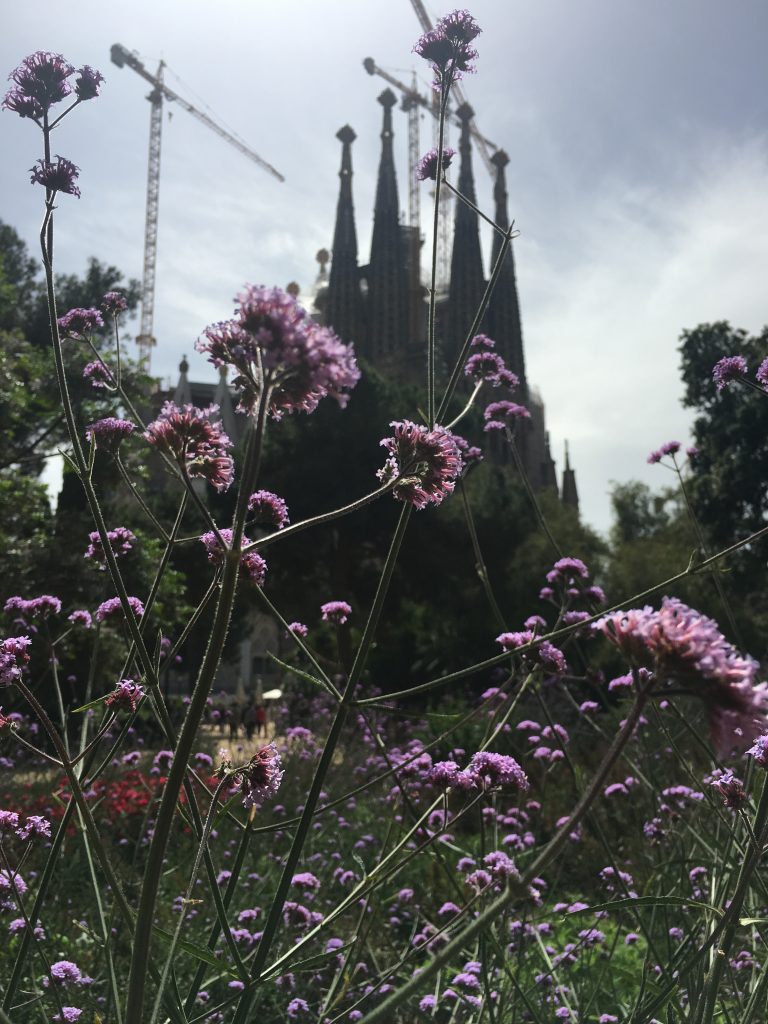 Although we mostly stayed in the El Raval neighborhood (highly recommend visiting it!) The Sagrada Familia was one sight we definitely needed to venture out to see. Pictures really don’t do justice to the amazing Gaudí building – but I tried my best to embody the elegance through a tastefully blurred Sagrada Famila with flowers picture, and the featured picture of this blog. The huge building is truly a piece of art, with architectural feats that keep your eyes happily occupied for a very long time. Although we didn’t see the inside (tickets sell out early!), just walking around the outside and the neighboring park was a huge treat. Outside the park, there’s even an FC Barcelona store if you need a football fix! 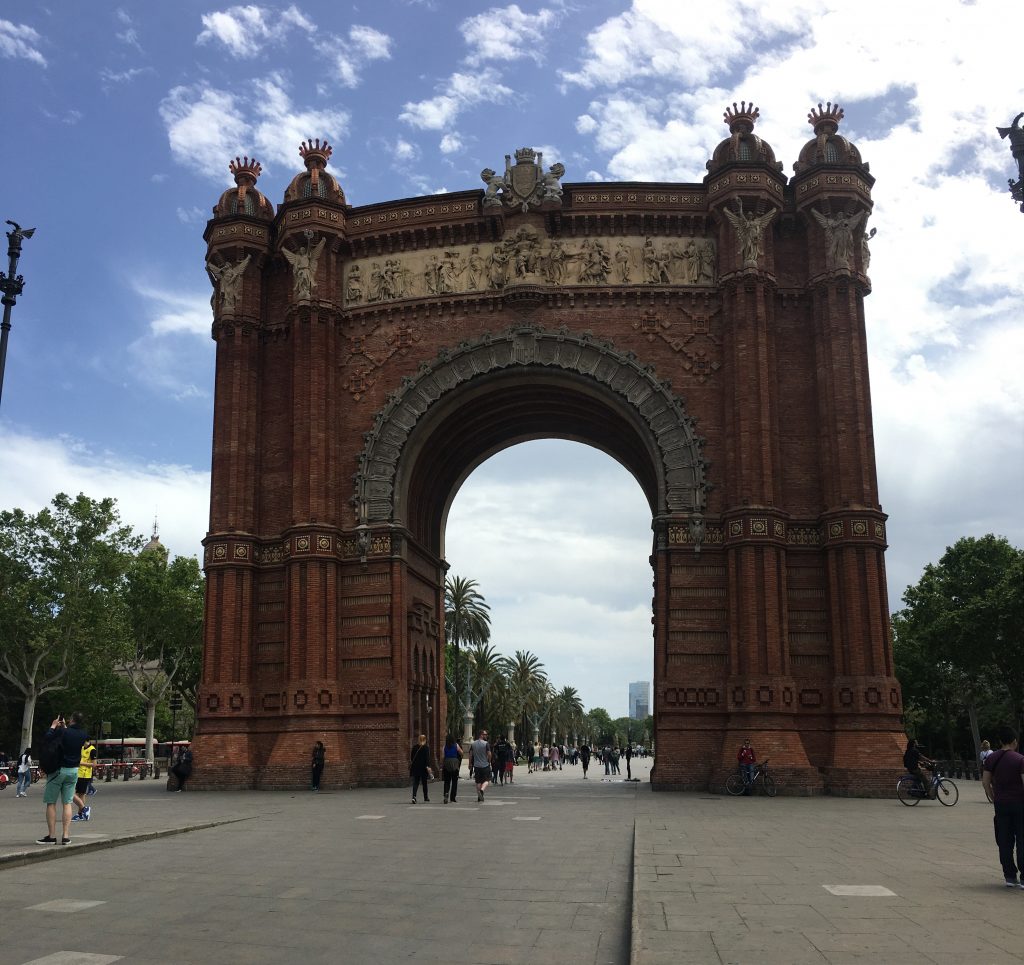 After seeing one of Barcelona’s most iconic landmarks, we had to continue our adventure and see the Arc di Triomf! The Arc and the Basilica are walking distance from each other, the zoo, and the beach – basically the perfect area of Barcelona to wander around for a day of walking. Around the Arc, there’s a large park where we spent a while lounging around and watching cute dogs, people selling balloons, and the occasional workout group.

Speaking of workouts groups (kinda), going to a European soccer (sorry, football) game is a real experience. And going to a Barcelona vs. Villarreal game at Camp Nou is the gold star of those experiences. We got to Camp Nou early, wandered around and got some awesome hats, some face paint (that was the most necessary part), and then settled in to watch an awesome game of football. 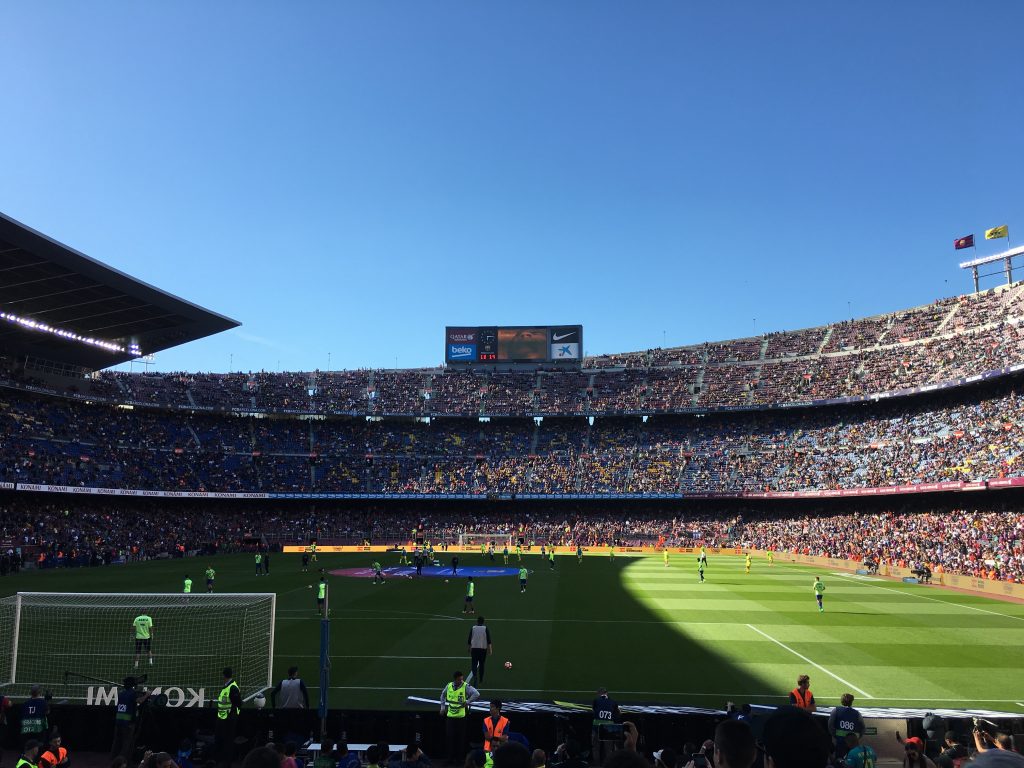 Villarreal Vs. Barcelona at Camp Nou

I like to think our very exuberant presence and face paint helped the spirits of the Barcelona players as they fought their way to a stunning 4-1 victory. 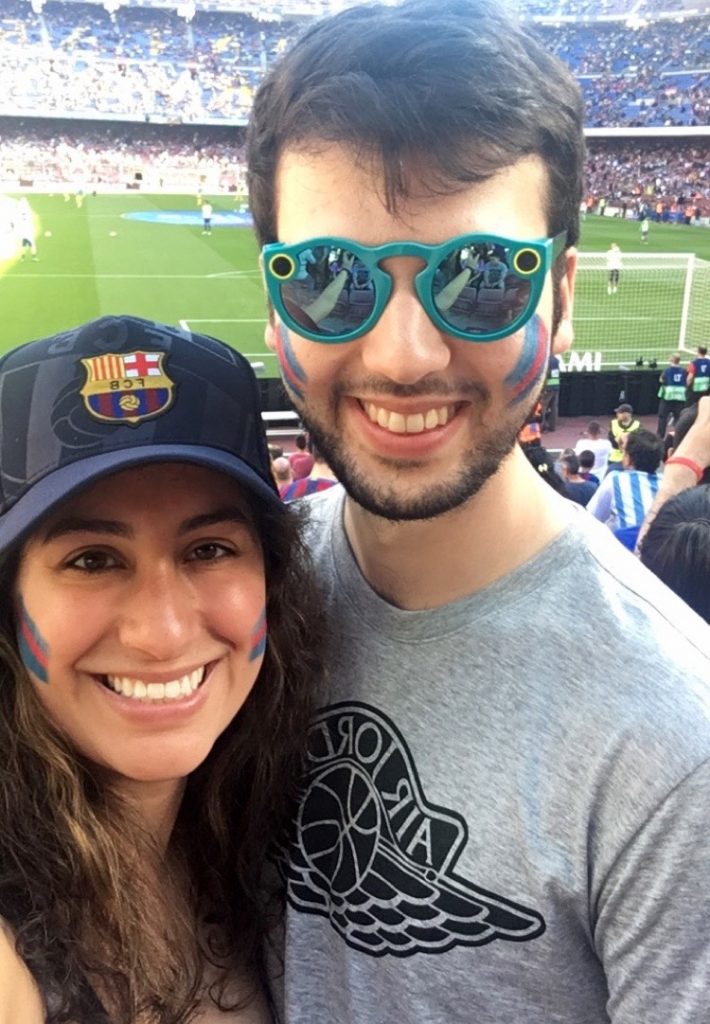 Me and my new favorite hat (My favorite Alessio too)

With limited time in the city, most of the art we saw was something stumbled upon during random explorations. Some of my favorites were the statues at the Barcelona port, including the mermaids, and a mysterious building we came across with incredible architecture and stone designs on the walls. 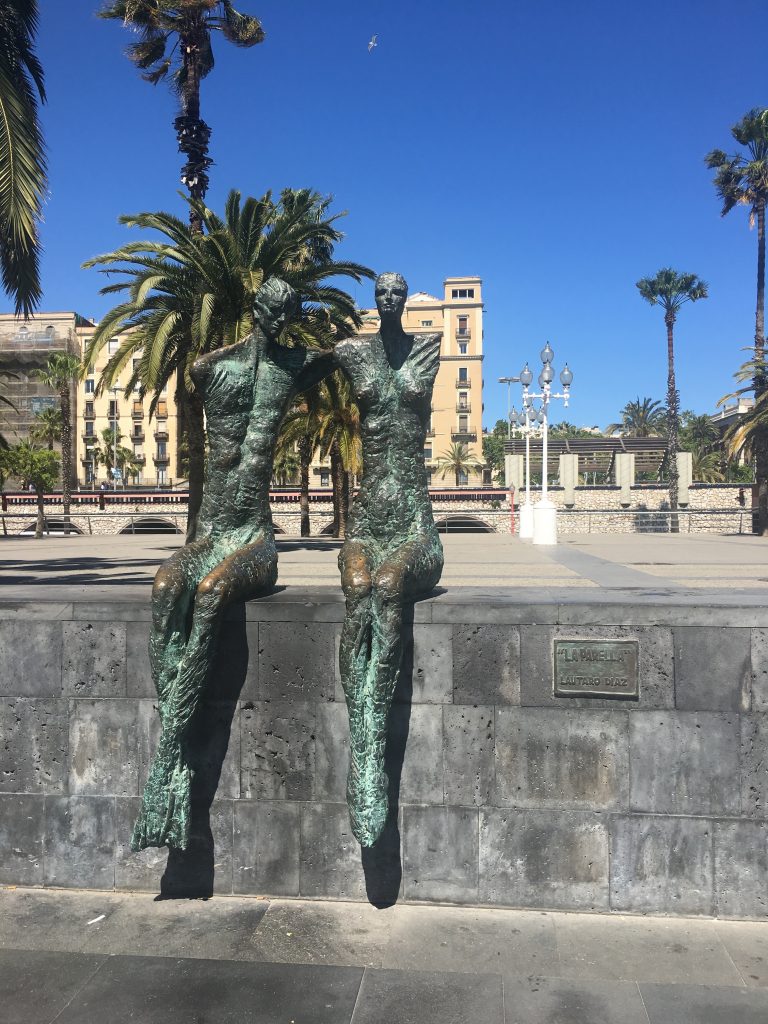 Mermaid statues at the Barcelona Port 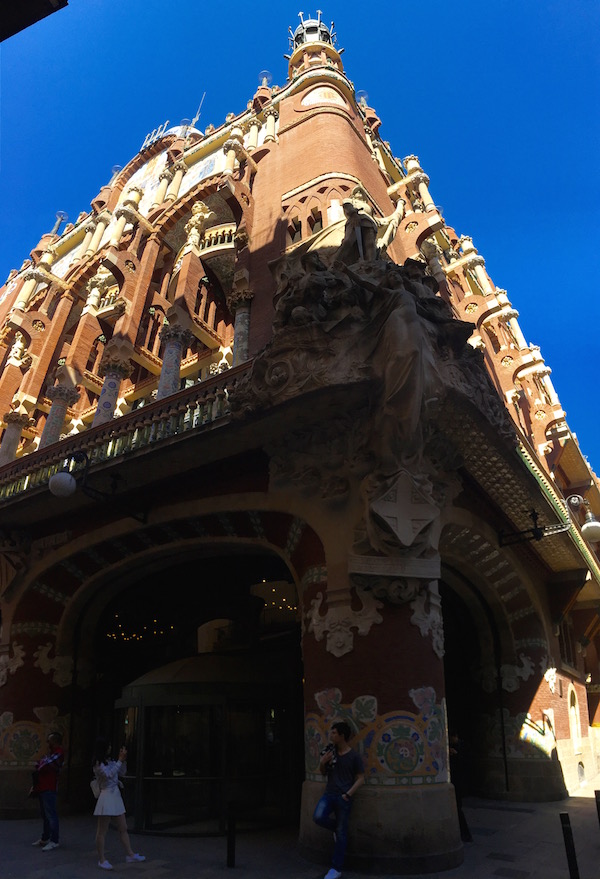 The sun made capturing the beauty of both tiers of this building difficult, but I tried! If you know what this building is, let me know!

As I said before, most of our discoveries were made during random explorations. Some of my favorite places were Barceloneta beach and the port (anywhere near water and I’m happy), and a park in El Raval that seemed to function as a community center and sported a giant chess set with very diligent players! 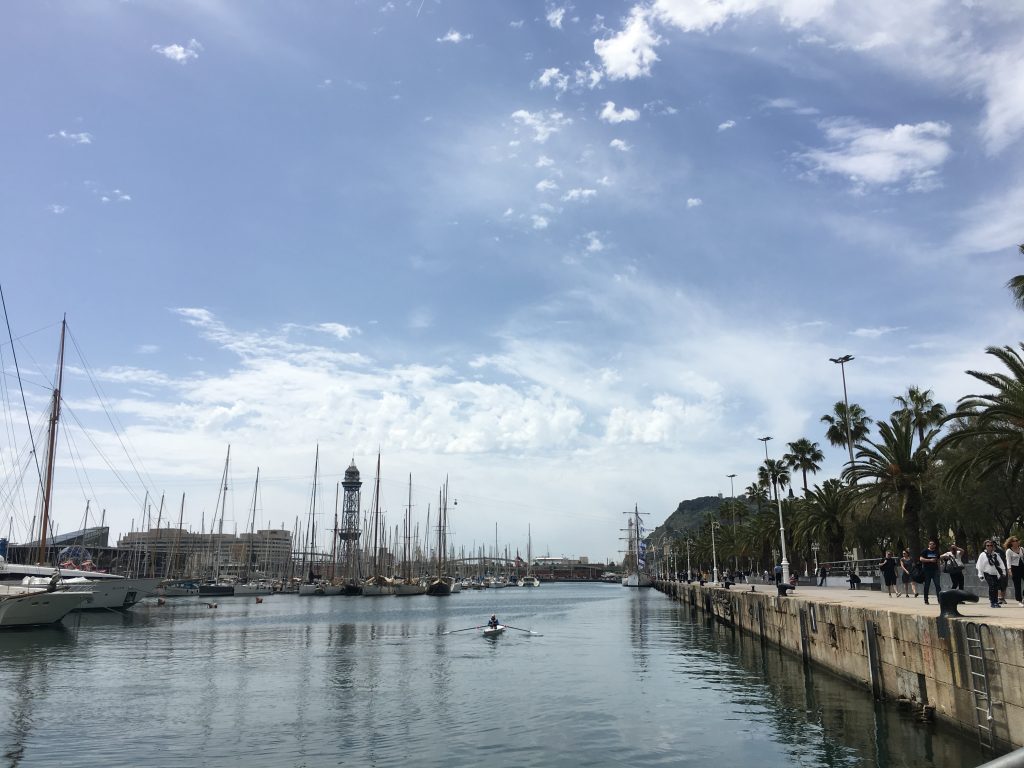 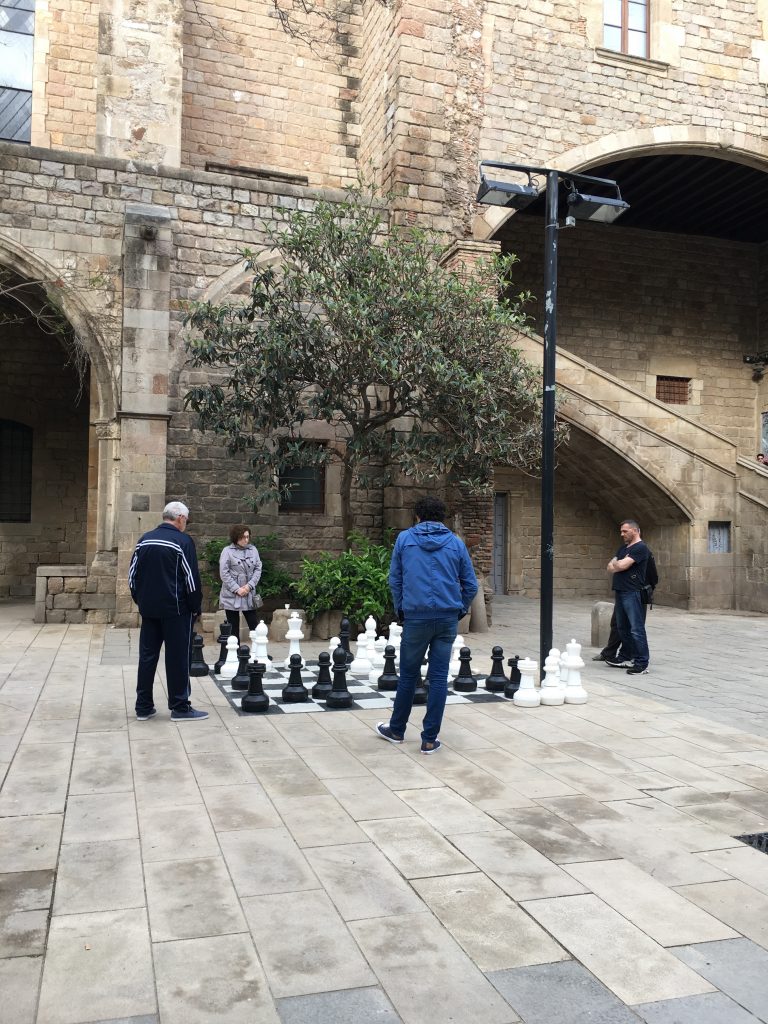 Jardins De Rubió I Lluch, a park and garden in the El Raval neighborhood 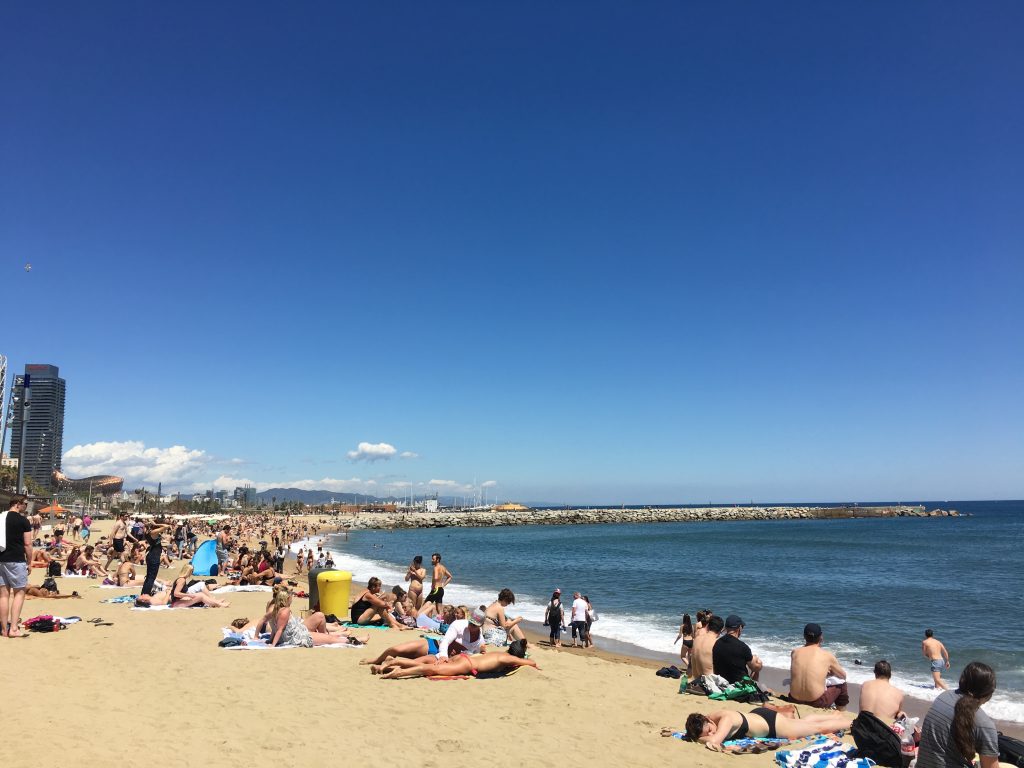 Although I do love the ocean and quality beach time, our trip to Barceloneta had the real purpose of filling our bellies with delicious paella and sangria along the water. It was delicious and worth it!

While two days wasn’t nearly enough to explore Barcelona and all its wonders, we did have a blast and got just enough of a taste of Spain to know that we’ll be heading back soon. Until then…