Brac Island is a land of endless sea views, mountain hiking trails, and some of the world’s most famous beaches. Visiting this Croatian island was one of my favorite trips yet, especially because I learned how to scuba dive! Here are 5 of my favorite places and things to do on Brac Island.

Supetar was the first place we visited on Brac. The small city has one of the island’s two large ports, and is the docking place of the main ferry that brings in travelers from Split, Croatia. The port area is one of the most lively spots on Supetar, and has many restaurants, bars, and shops that make the area perfect for walking around, eating, or relaxing – all things that I really enjoy doing. Since our home base on the island was here, we spent lots of time at the port and saw some fun things like a local family vs family apple bobbing contest. Outside the port area, Supetar was surrounded by picturesque beaches with awesome views of the mountains of Croatia mainland. 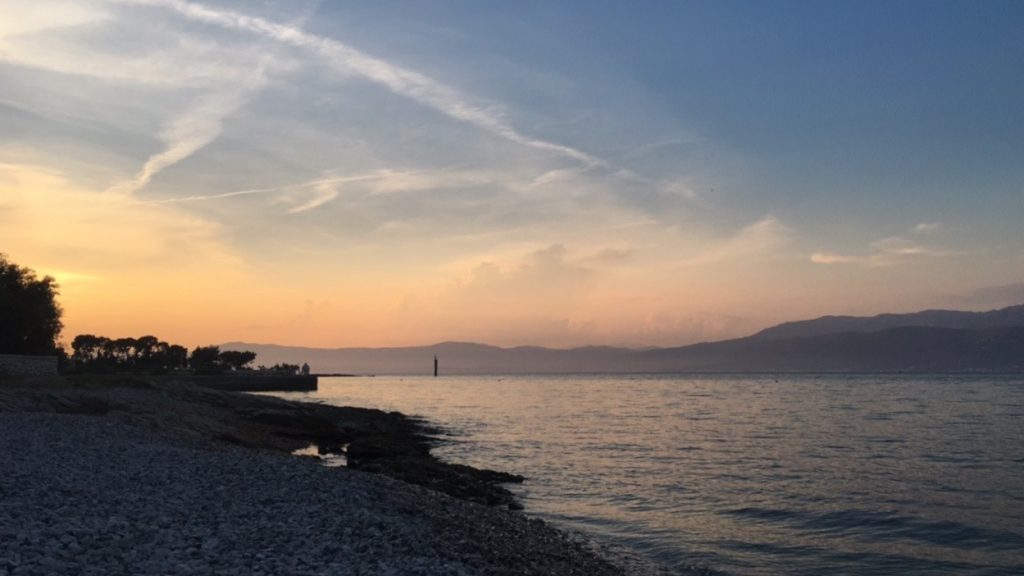 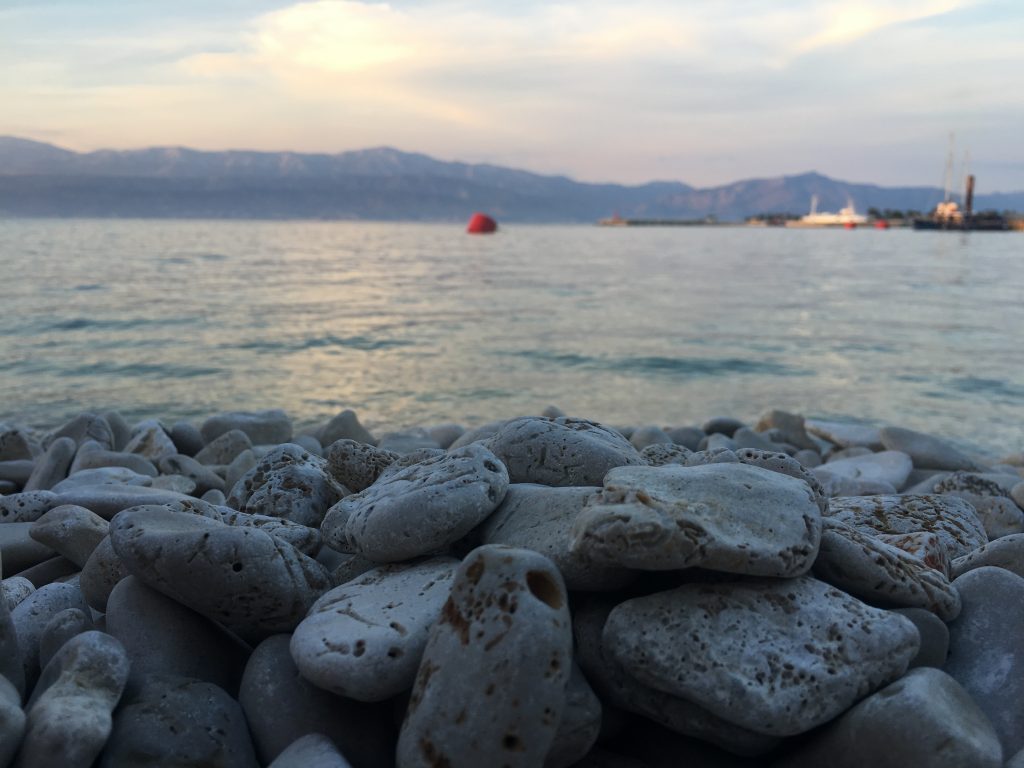 All of the beaches we encountered on the island of Brac were pebble beaches (we toted a yoga mat around for comfort #innovation). One of my favorite beach activities was combing through the pebbles and finding things! Top three finds you ask? A starfish that washed up with high tide (Alessio spotted it and we rescued it), fossil stones like those in the picture above, and a coin from Yugoslavia!

Bol is the second ‘big’ city on Brac island. It sits almost directly across the island from Supetar which makes for a beautiful drive through winding mountain roads and tiny towns. We ventured to Bol during our Zlatni Rat trip (read lower for Zlatni Rat), and spent a little time walking around after we had our fill of the beach! 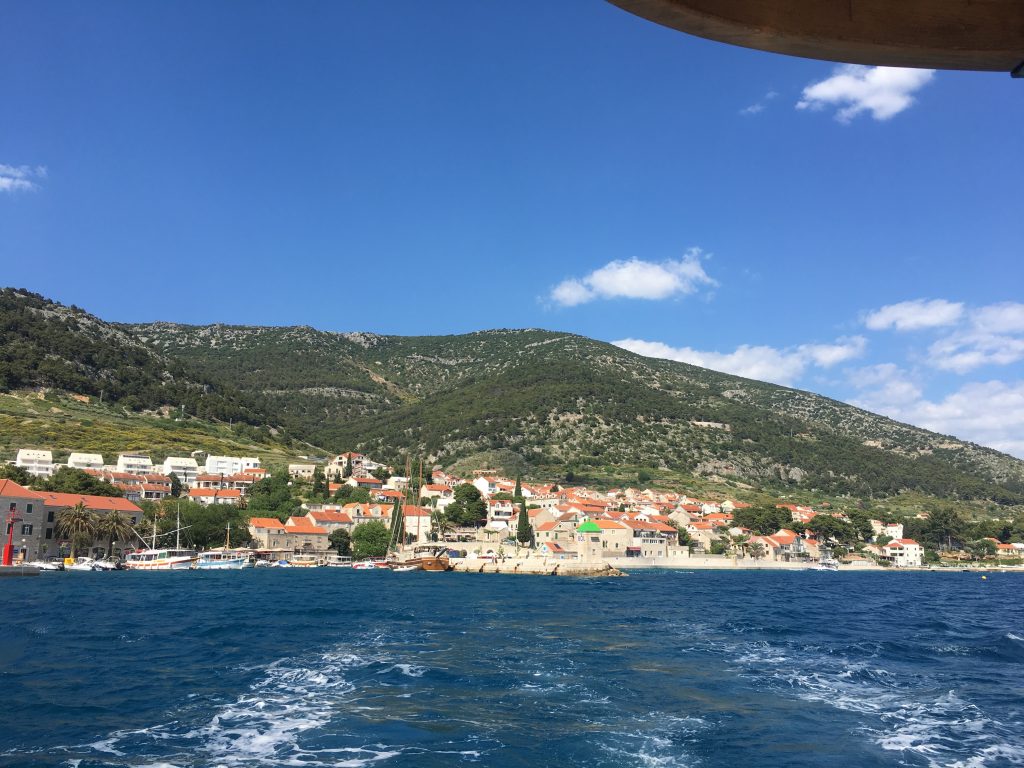 Bol from the sea

Since the area surrounding Bol is so popular for hiking and swimming, it’s common to find taxi boats that will take you to and from small docks along the coast. The picture above was taken from a taxi boat we hopped on at Bol and took to the beautiful Zlatni Rat beach.

Zlatni Rat, a pebble beach in Bol, is a natural phenomenon that brings travelers from all over the world. The beach stretches away from Brac island into a point, creating a stone tentacle that reaches out into the sea. Because Zlatni Rat is created by the ocean and its surrounding currents, it’s common to see the tip of the stone tentacle sway slightly when ocean currents shift. The beach is also one of the best places to sunbathe on Brac as there is a constant breeze helping combat the heat of the sun. (Which makes using sunscreen really important!) Water sports like kite surfing and wind surfing are also hugely popular due to the constant breeze. 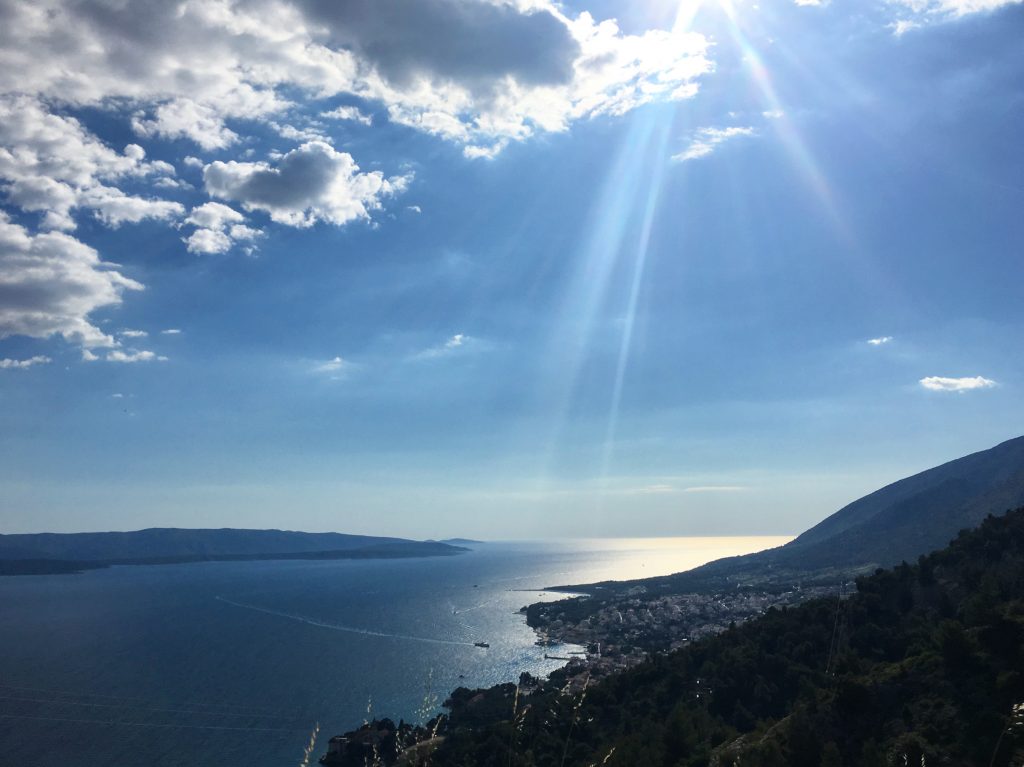 Driving the Zlatni Rat, a view from the mountain roads 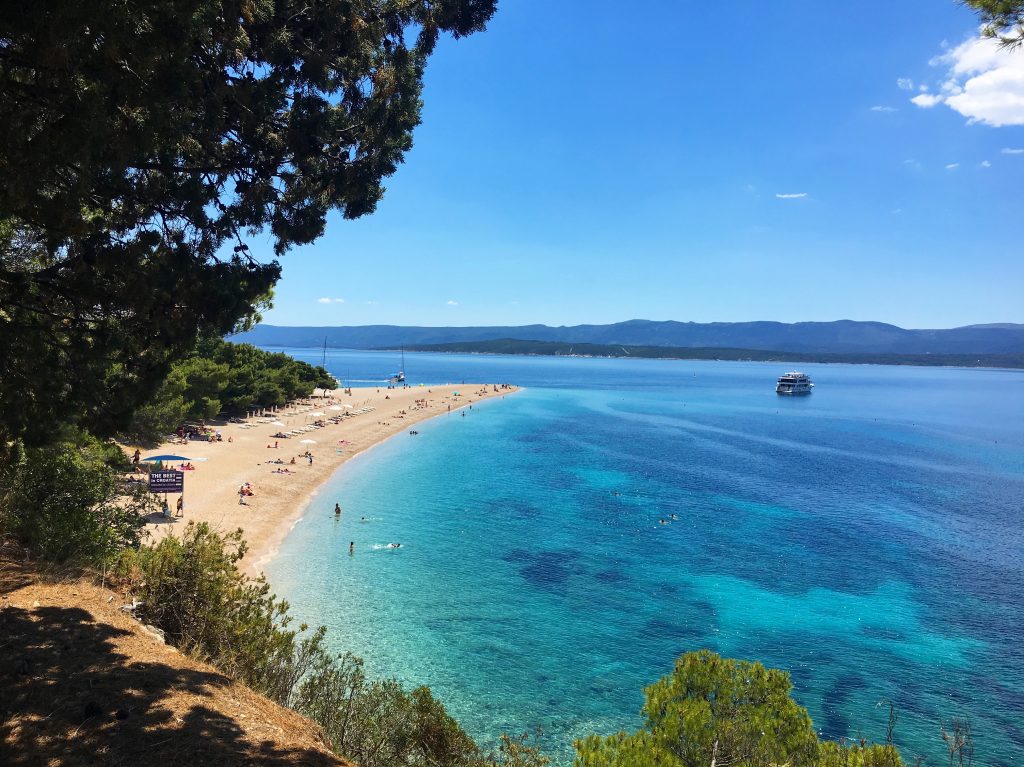 We didn’t get to see the beach tentacle sway, but we did get to enjoy the crystal clear water, the toasty sun, and see some really talented water sport-goers!

Almost 400 years ago, monks set foot on Brac island and started the Blaca Monastery in a cave. The monks built a structure surrounding the original cave (which is now the monastery kitchen), and lived for many years off the land. By farming, growing grapes, making olive oil, and raising bees for honey, they built a small self sufficient community. The wine, honey, and olive oil that wasn’t used for food was then traded for treasures from all over the world. Two of the most surprising treasures the monks collected are a grand piano, and a telescope that stands over 6ft tall. Just imagine being one of the people that had to carry those up a mountain from the sea! Besides large treasures, the literature, art and tools in the monastery are incredible to look at. We were told on our tour that some of the astrological tools and records are actually still consulted by governments and scientists around the world. The monastery is no longer active, but is open for visitor who get there by hiking into the wilderness that surrounds Blaca. Certain parts of Blaca are open for tours, which are led by two brothers who inherited the responsibility of caring for the ancient monastery. 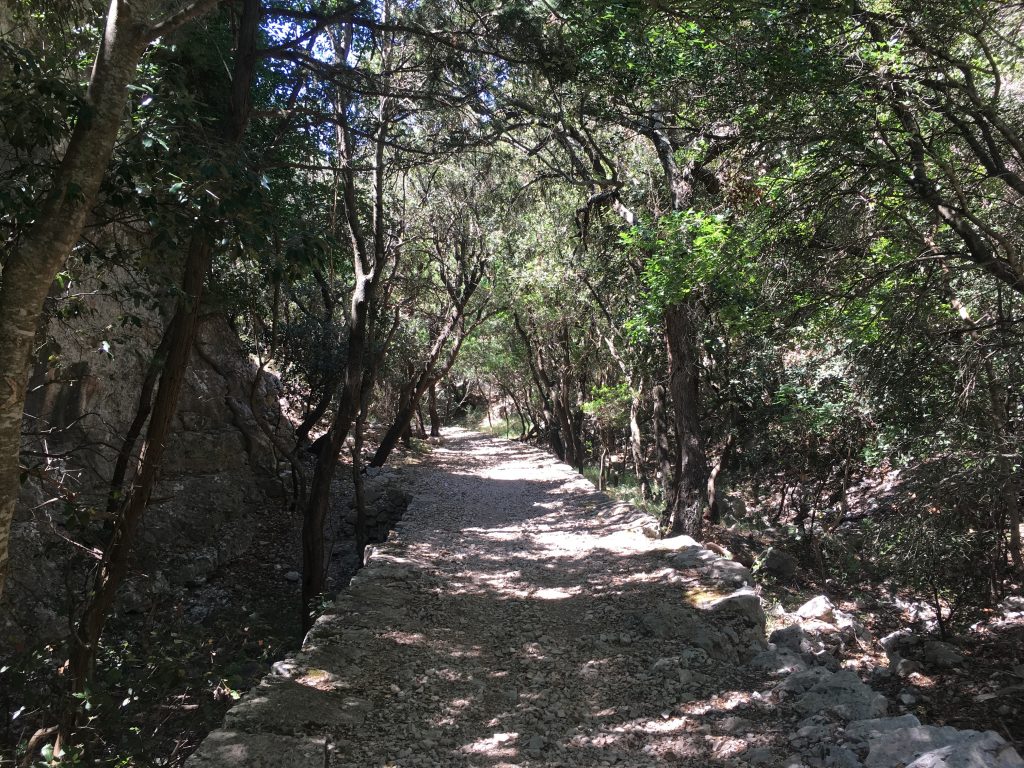 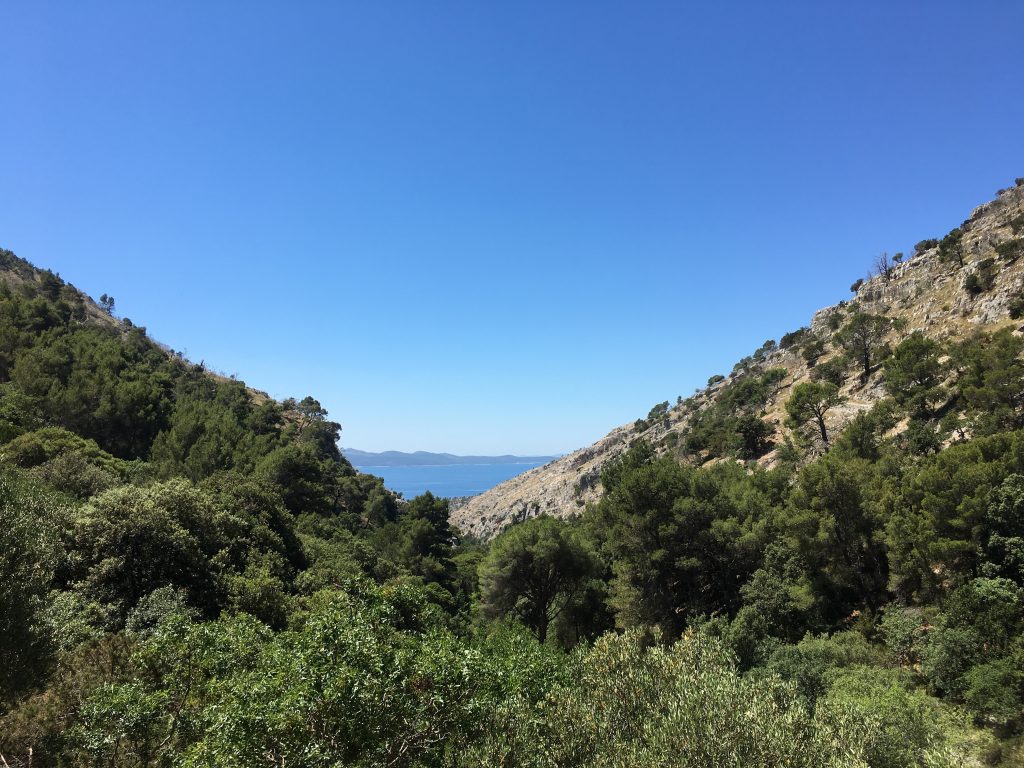 View of the sea from Blaca Monastery

Pictures of the monastery aren’t allowed, but pictures of the way there do a good job of showing just how remote the location is. Think of the people who carried a piano from the sea through that valley in the bottom picture!

Diving off the coast of Brac was breathtaking! I completed a PADI Open Water Diver course through Fun Dive Club in Supetar, and I’m already counting the days till my next dive. The course starts with theory, followed by 5 dives in a pool to get used to the equipment, and finally 4 dives in the open ocean. Being 60ft underwater during those dives is an experience beyond words. Imagine being surrounded by schools of fish, purple sea slugs, and giant mussels. Then imagine swimming through underwater tunnels and circling giant underwater hills made from volcanic activity in the past. It’s a different world, and a beautiful one that I now have a bit of an addiction to! Unfortunately, due to diving being underwater and my lack of underwater photography equipment, I don’t have pictures of my diving. But, to try and make up for it, here are some pictures from a submarine boat! (also a super fun activity in Supetar!) 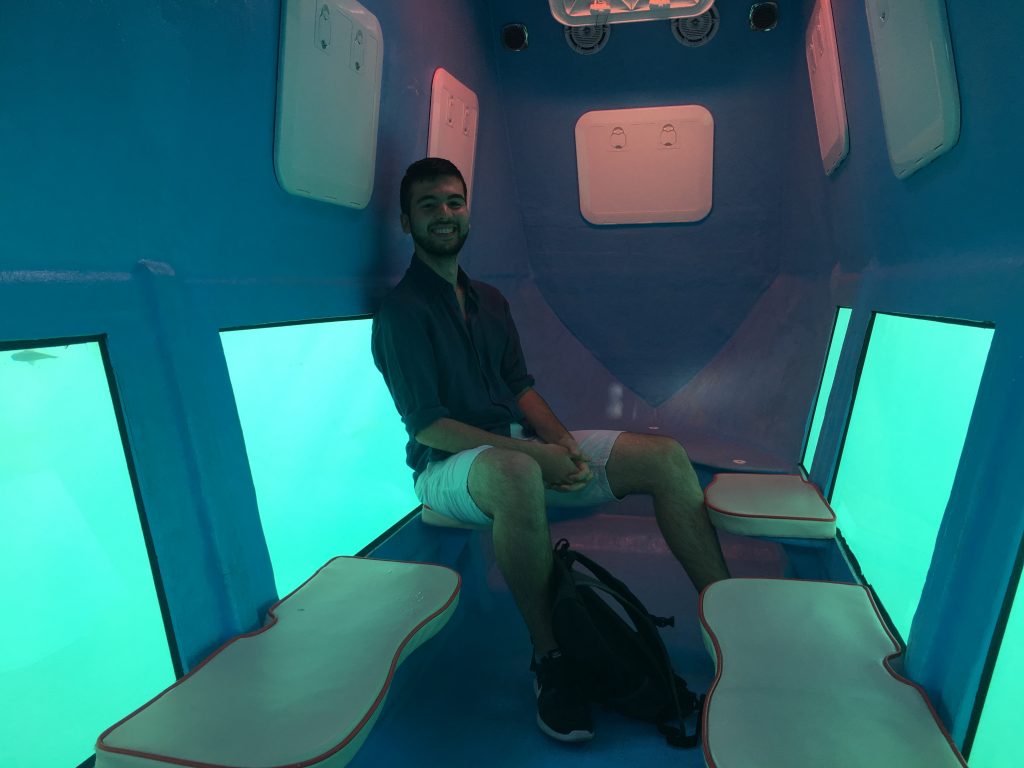 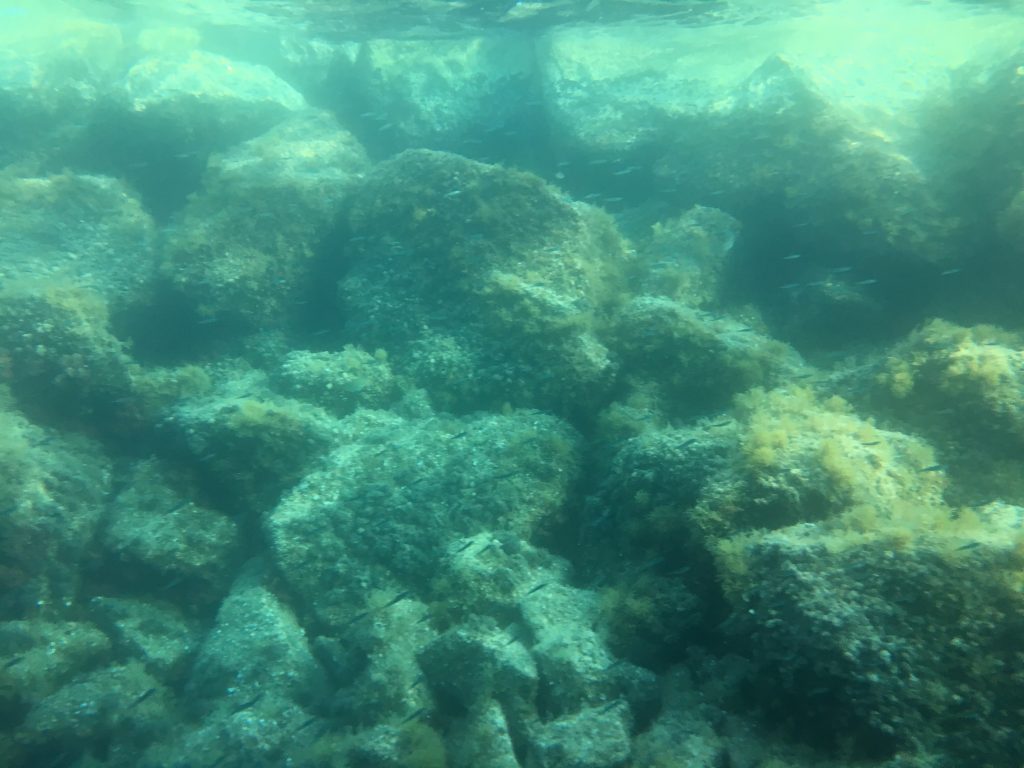 Look closely for the small fish!