After a week and a half in Dublin, I’m fairly certain the city decree is to give spontaneous “Wow, who would have thunk” moments.  Fairly frequently Alessio and I found ourselves in situations where the word “likely” was the least accurate descriptor. Maybe it was because we’ve been on the road so long social norms are slowly being forgotten, maybe it was because Dublin has a kind of magic floating in the air. Either way, here are 5 things we loved doing, and the crazy situations that went along with them. 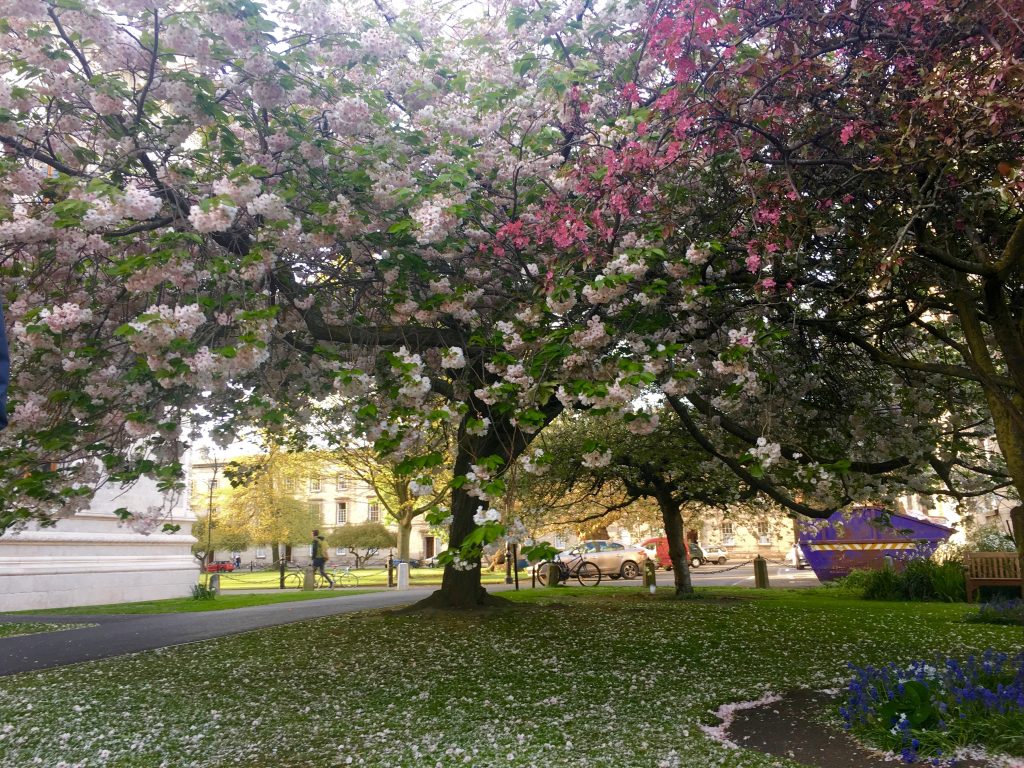 On one miraculously sunny day, we wandered the campus of Trinity College. From blooming gardens, to a science center with interactive robotic exhibits, to the Book of Kells, the campus has a wealth of activities (and lots of beautiful trees!)

In the science center, there was an exhibit that studied tickling! A person undressed, and was robotically tickled while researchers measured the difference in response of a person expecting the tickling, vs. surprise tickling. 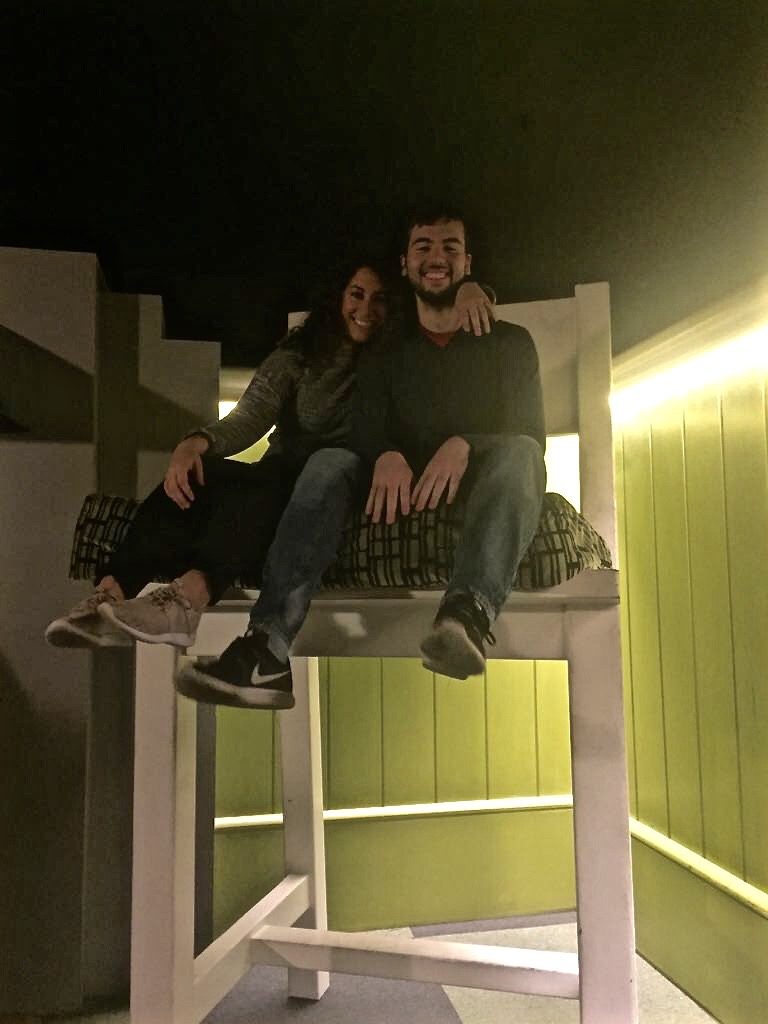 Pardon the dark photo, leprechaun life doesn’t come with the luxury of great photo lighting. The Leprechaun museum is a short guided tour that dives hands-on into the mythological history of Ireland.

Being left in a giant’s room (literally!) to play and climb as you please is as good as unlimited ice cream. It was tough work getting up on that chair! 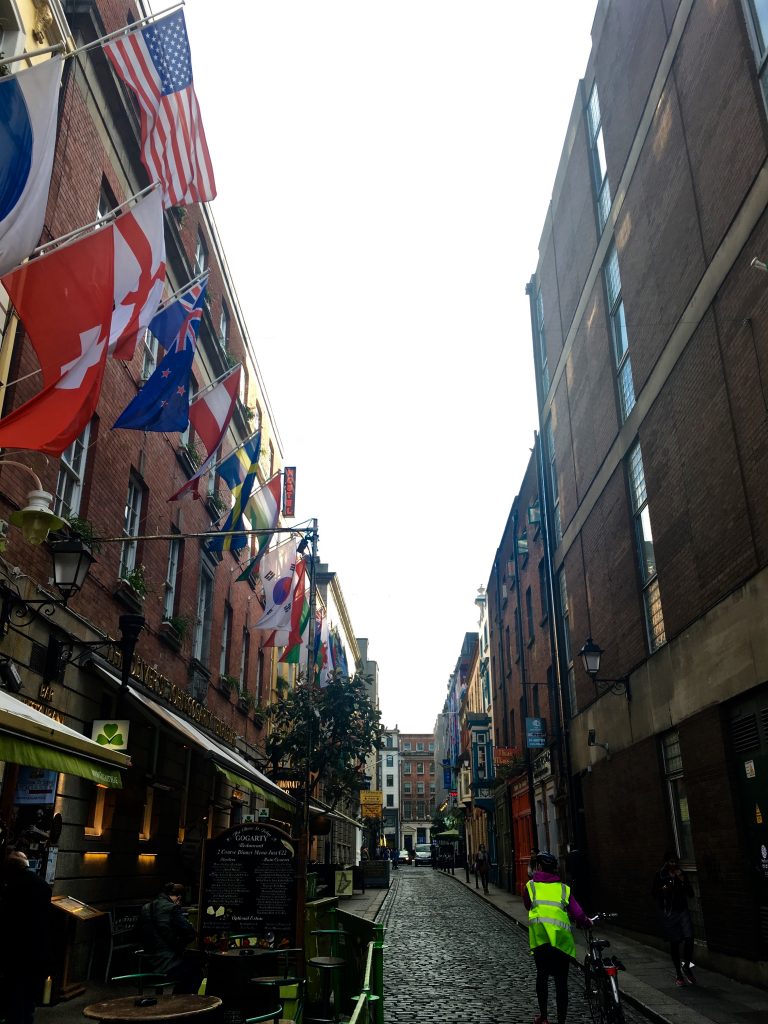 Temple Bar, a lively neighborhood, is the perfect place to grab a pint in Dublin. (Guinness is recommended. I mean, it’s Ireland after all!) We stopped at Temple Bar Pub (est. 1840), a bar in Temple Bar neighborhood (how many times can I say bar in this blurb?). At the bar (last “bar” I promise) we learned that whiskey on tap is a common thing, and that it takes almost two minutes to pour the perfect Guinness pint. We spent various hours restaurant and bar hopping (oops, that was the last one, pinky promise), listening (and singing along to) live music from all backgrounds; and even saw a comedy show! (International Comedy Club highly recommended, get there early and sit in front!)

Pre comedy show, we stopped at the International Bar (same building as the comedy club, there’s even an International Lounge in the basement!) for a quick pre-dinner drink. As soon as we walked in, we were thrown into a lively conversation with a group from Chicago. Long story short, earlier in the day Gio, a drummer from Chicago, and his group of friends ran into a band who happened to have a gig that night and were missing a drummer! The band had recruited Gio moments before we met him and his crew. Voila! Our night was planned. After the comedy show, we went to hang out with new friends while Gio drummed, and danced the night away!

After almost two weeks in Dublin, we decided we needed more time in Ireland and switched our flights so we could spend a few days in fishing villages. (Once you’ve gotten used to fresh seafood daily, it’s easy to convince yourself to stay a bit longer.) Howth and Malahide, cities just north of Dublin, were prime candidates and we hurried to book an Airbnb before jumping on the DART train and heading north. 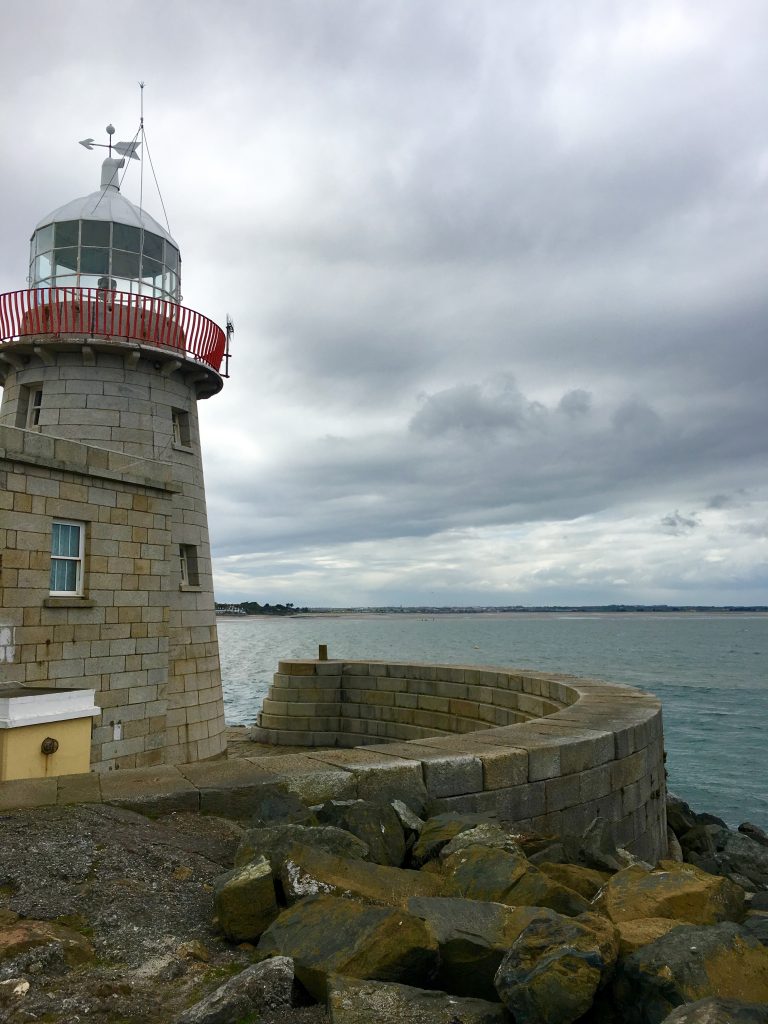 Howth is a city where every restaurant has a “catch of the day” special, and where the temptation to go to each of those restaurants and try it is very strong. It is also home to majestic cliffs with views that feel like flying. (Check out pictures at the end of the post). Malahide is equally beautiful with sprawling gardens, an inhabited castle, and a great view of the Irish sea.

Howth has an amazing view of Dublin bay, and we just happened to be in the same spot at two magnificent times of the day: high tide and low tide. I almost didn’t recognize where I was when the tide was out! In Malahide, we encountered true serendipity. Seconds before she left for the day, we rang Binni’s doorbell for a threading appointment (travelers need good eyebrows too). While chatting, we learned that the chances of us meeting were slim to non existent, and that she’s traveling to Rome and in need of a guide for the city. Happily I volunteered, and we both agreed that the universe was pulling destiny threads that morning in Malahide! 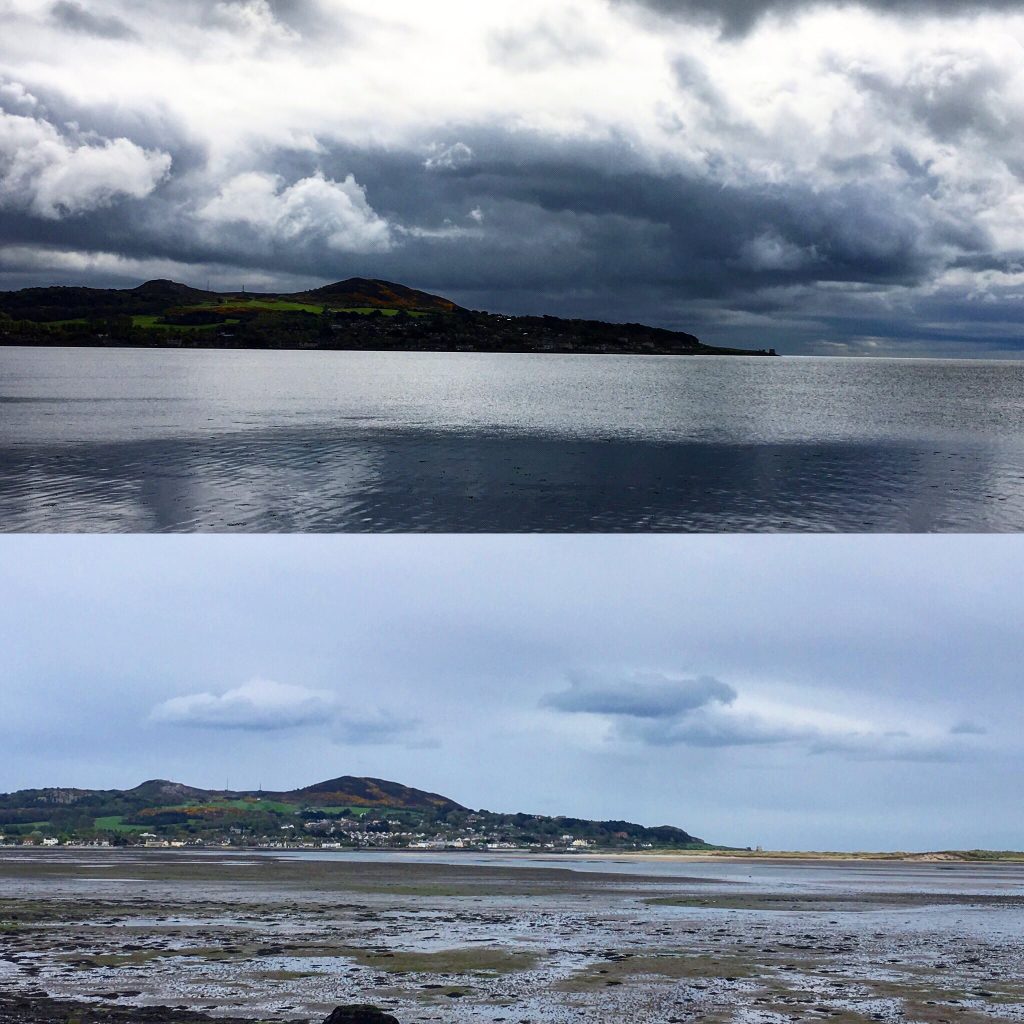 High and low tides at Dublin Bay, looking out to Bull Island

Who would have thunk Ireland could be so sunny! We had a lot of sunny days, a couple cloudy, and one with wind, snow, rain, and sun! With all weather considered, the sights were still beautiful and worth braving some April showers. 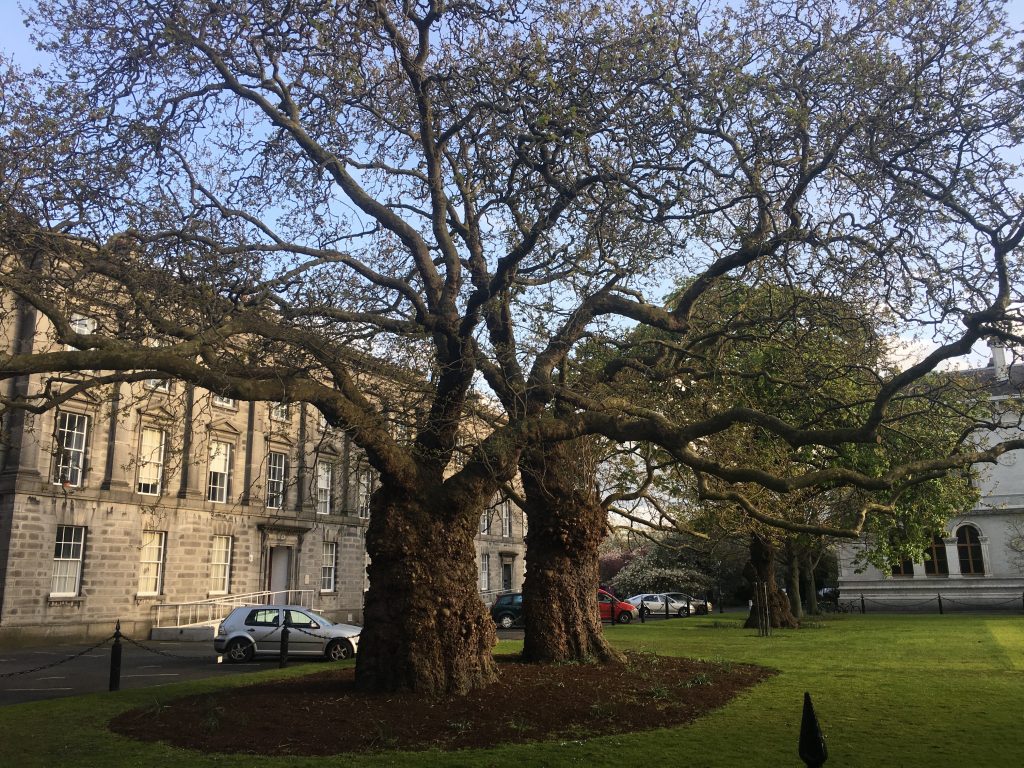 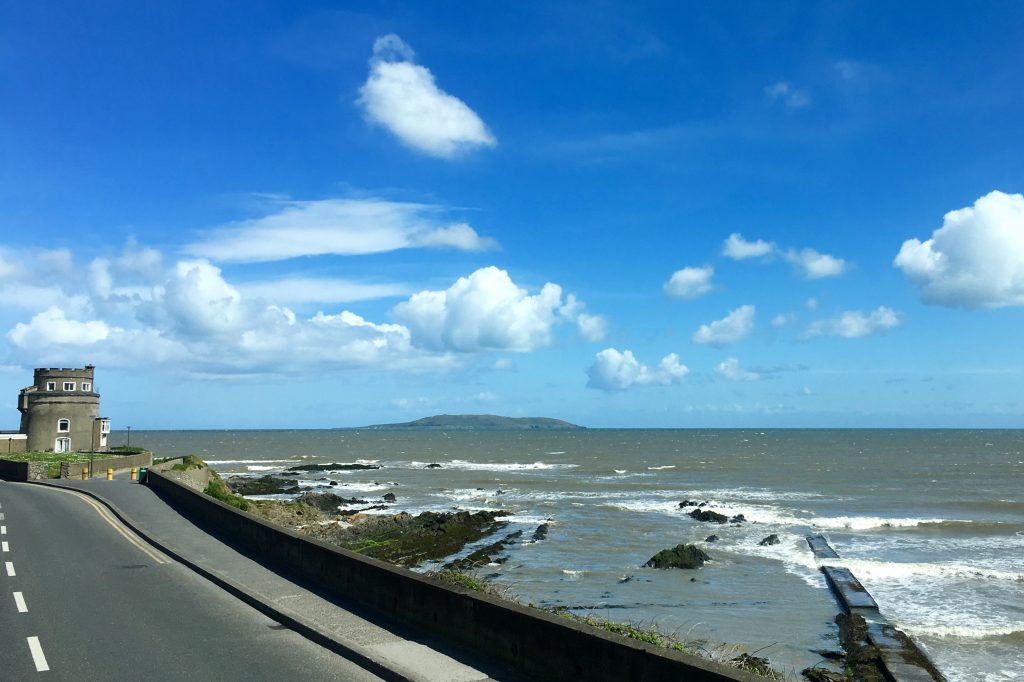 View of the Irish sea on the drive up to Malahide, a city just north of Howth 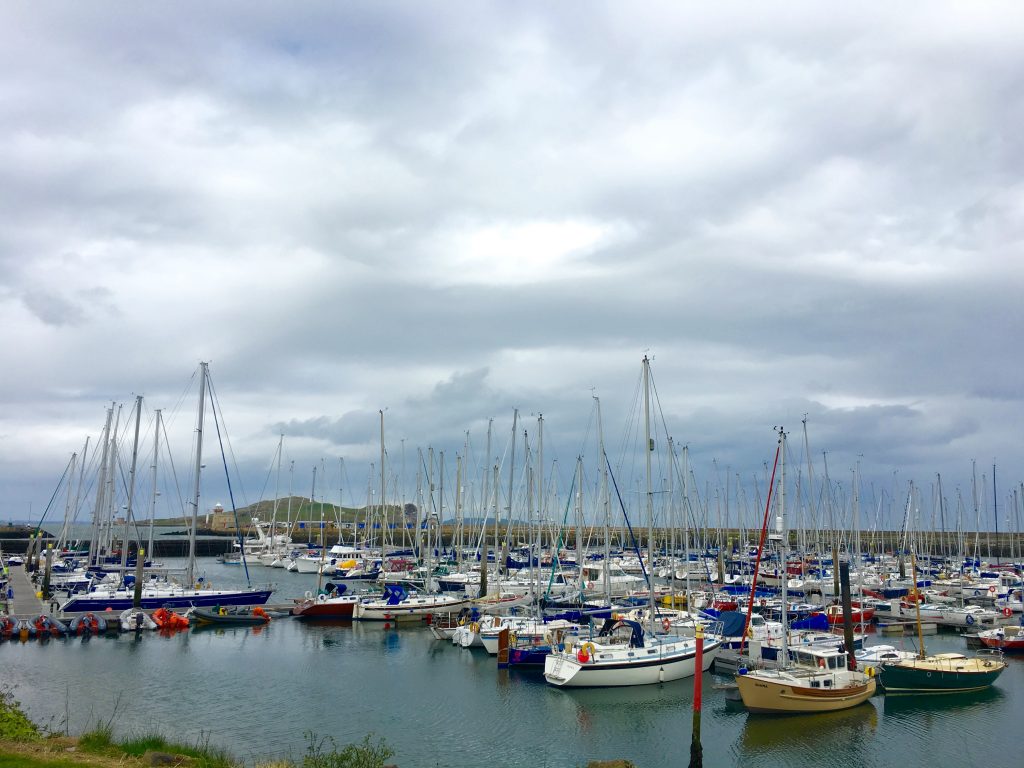 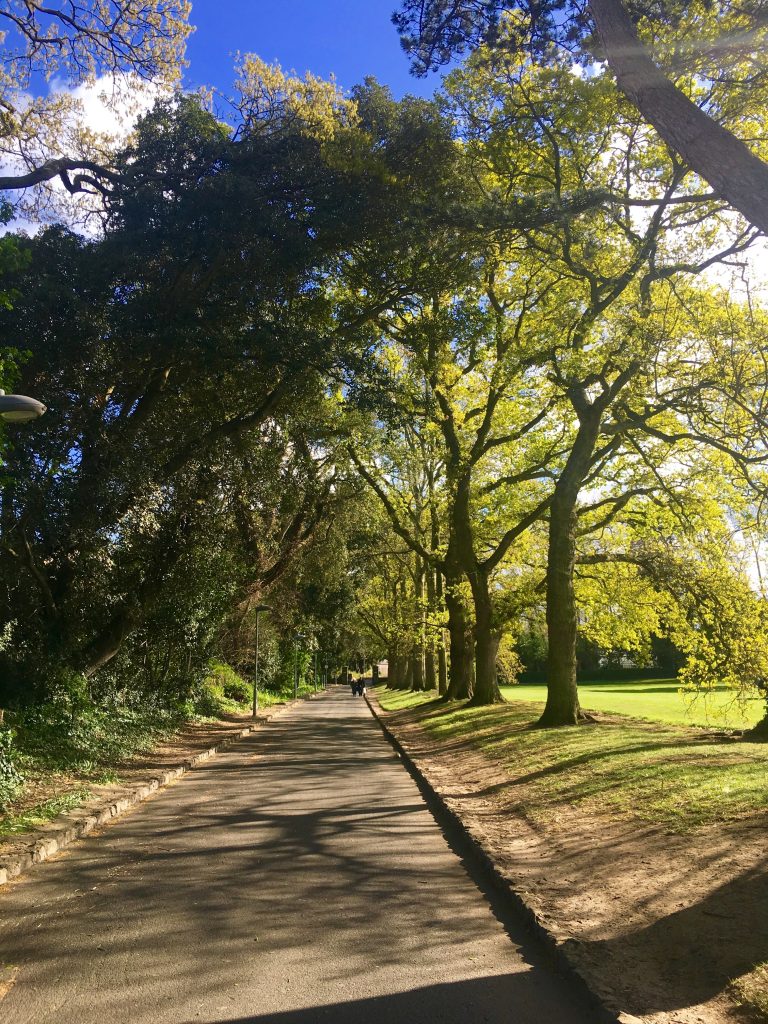 In Malahide, strolling to see the castle 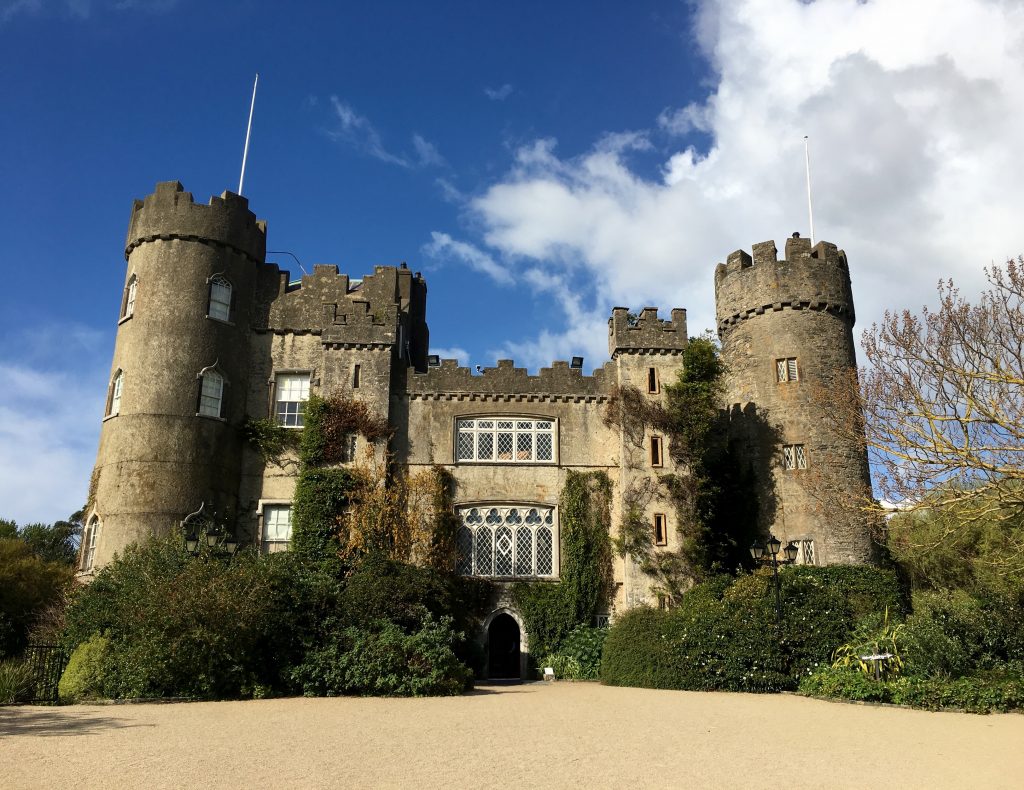 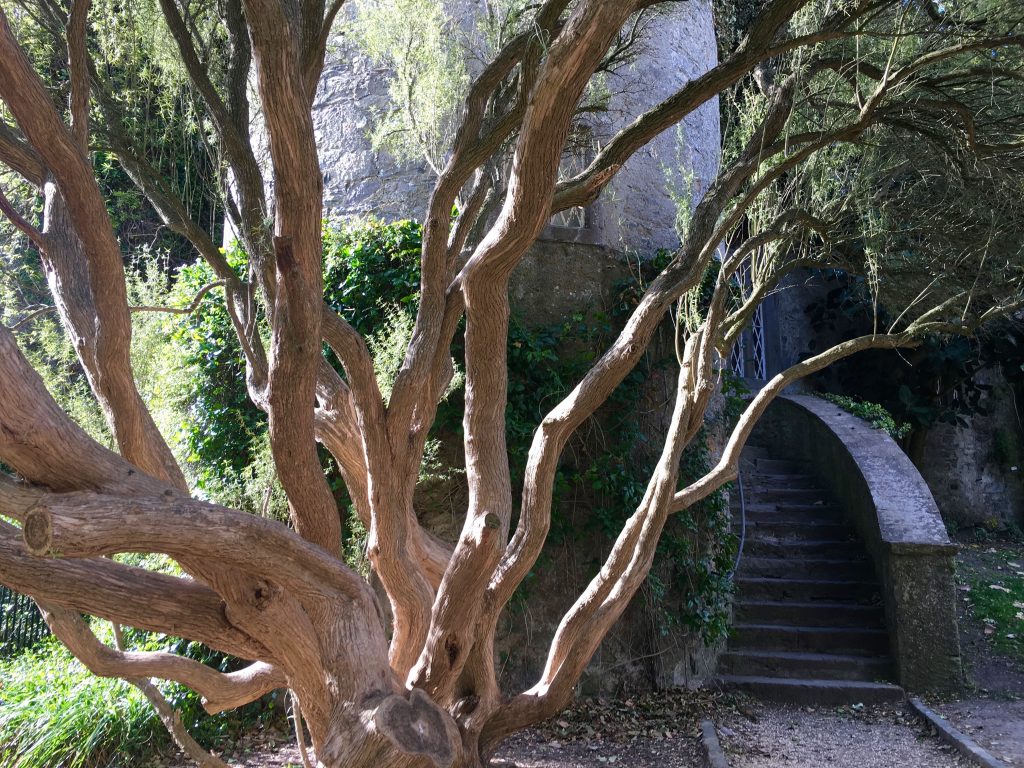 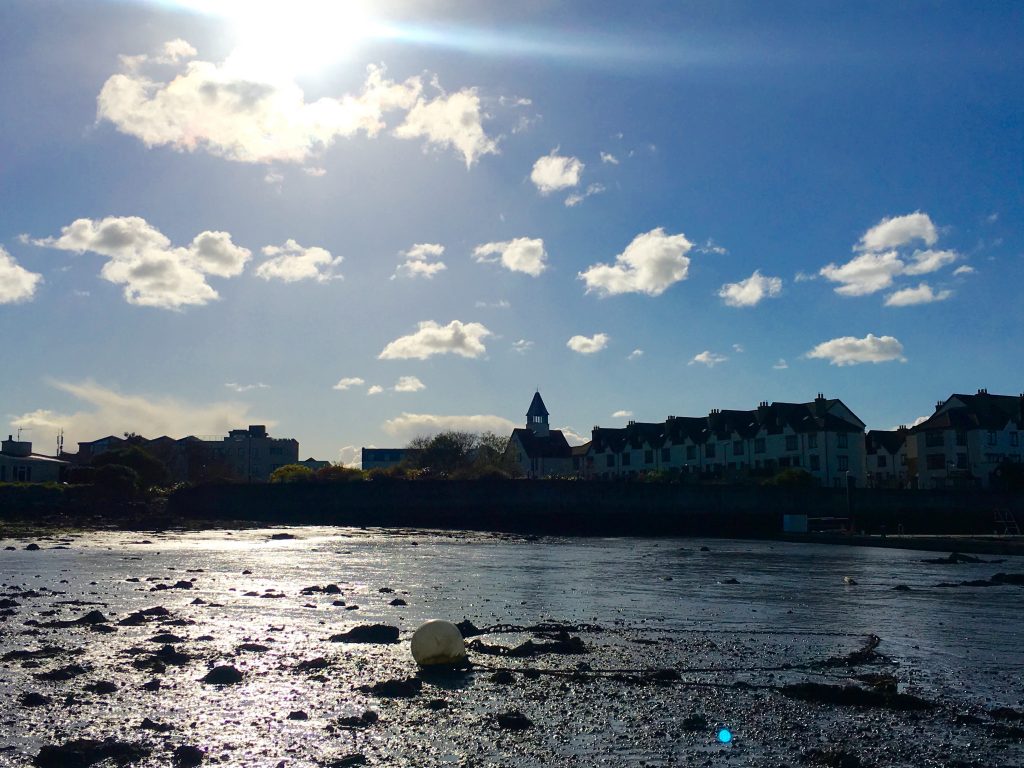 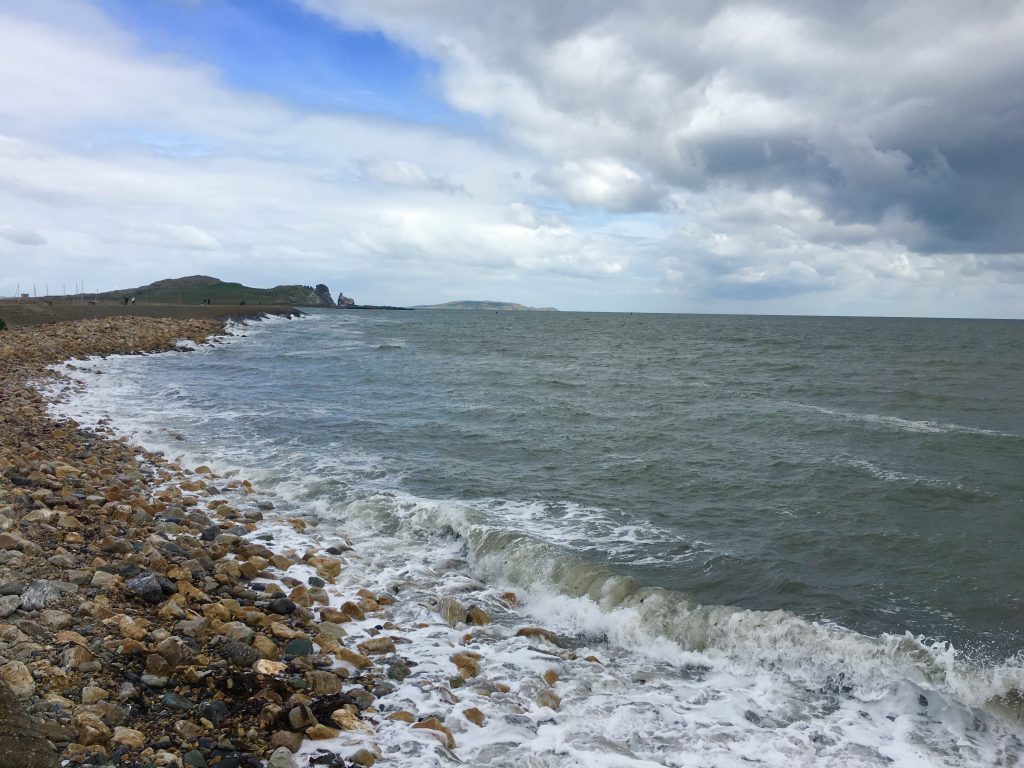 Breaking waves from the Irish Sea 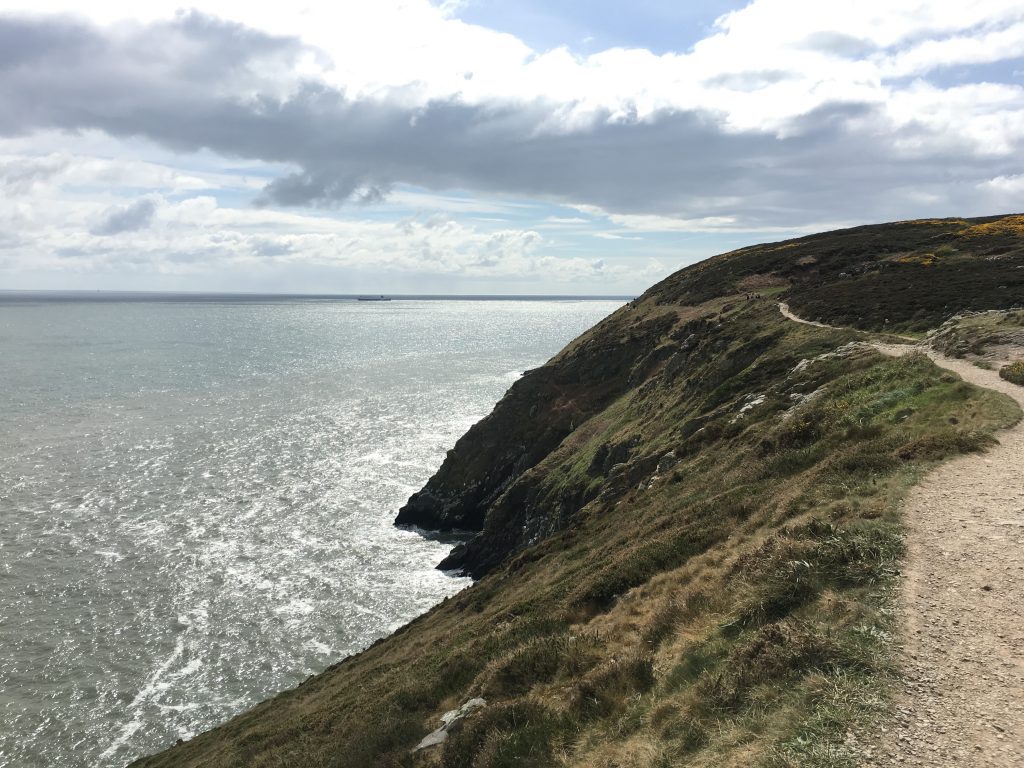 Howth cliff walk, not to be attempted on windy days 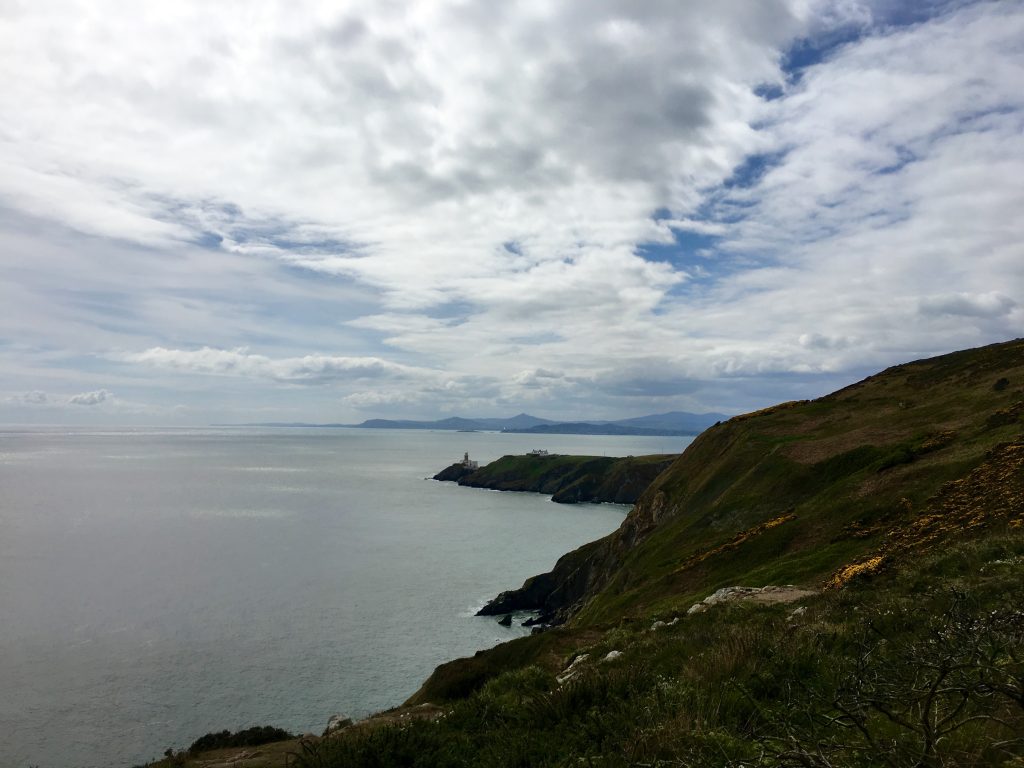