During our time in Scotland, we knew our trip wouldn’t be complete without a visit to the Highlands.  (We were right.) The Highlands evoke similar feelings as seeing the Grand Canyon for the first time. The amazing landscape is full of beauty, danger, history, and seems to whisper secrets of freedom and wild things in your ear as you breathe in air that tastes slightly of peat and pine. Here are a few sights and stories of the Highlands that will have you looking up flights to Scotland.

Our time in the Highlands was spent with a small group led by Douglas from Galway, courtesy of Rabbie’s Trail Burners. If you’re going to be in Scotland, Ireland, or England anytime soon, look them up. The tour was perfect! On our way up, Douglas took us through Callander and Doune; both small villages directly on the path north to Glencoe. (I’ll talk about Glencoe in a bit). 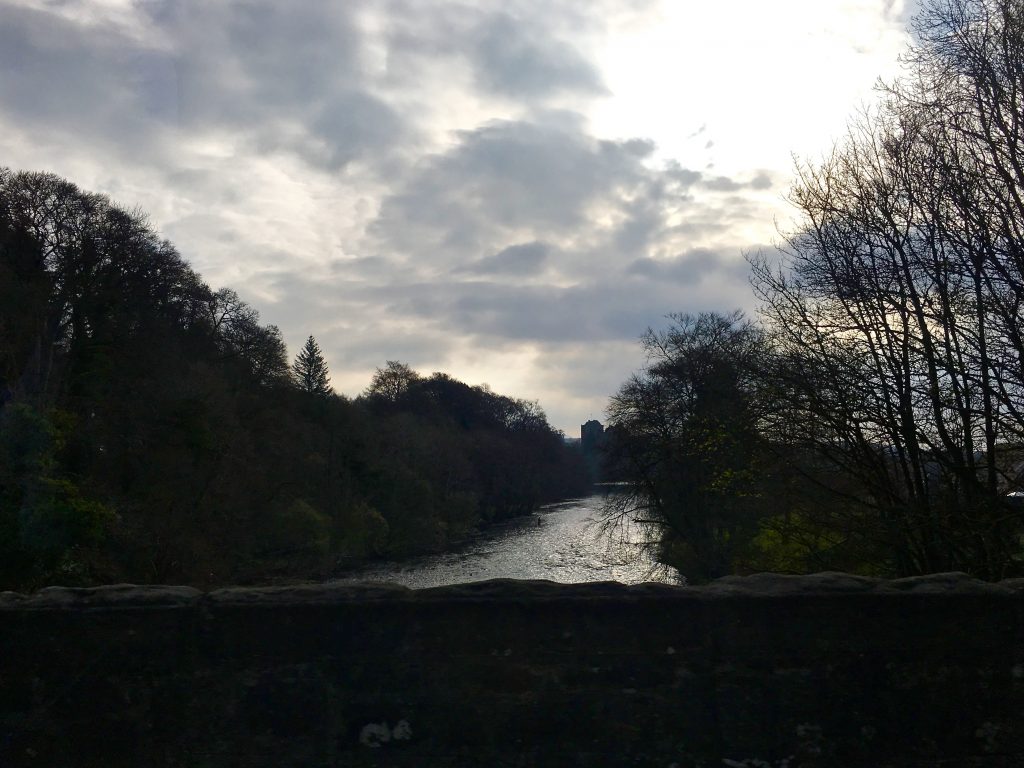 Crossing the river Teith into Doune

Doune was the first town we passed on the path north. As we crossed the river Teith, Douglas told us about the rich history of Doune, including their notable pistol making skills. Apparently, Doune pistols were used during Obama’s inauguration! As renowned pistol makers, the citizens of Doune were very conscious of their safety. Visitors and townsfolk alike would come into the town over Teith, but weren’t allowed to bring their weapons. As they crossed the river, they turned over their weapons to the authorities to ensure a weaponless peaceful town existence. You could say… they were armed to the… Teith! 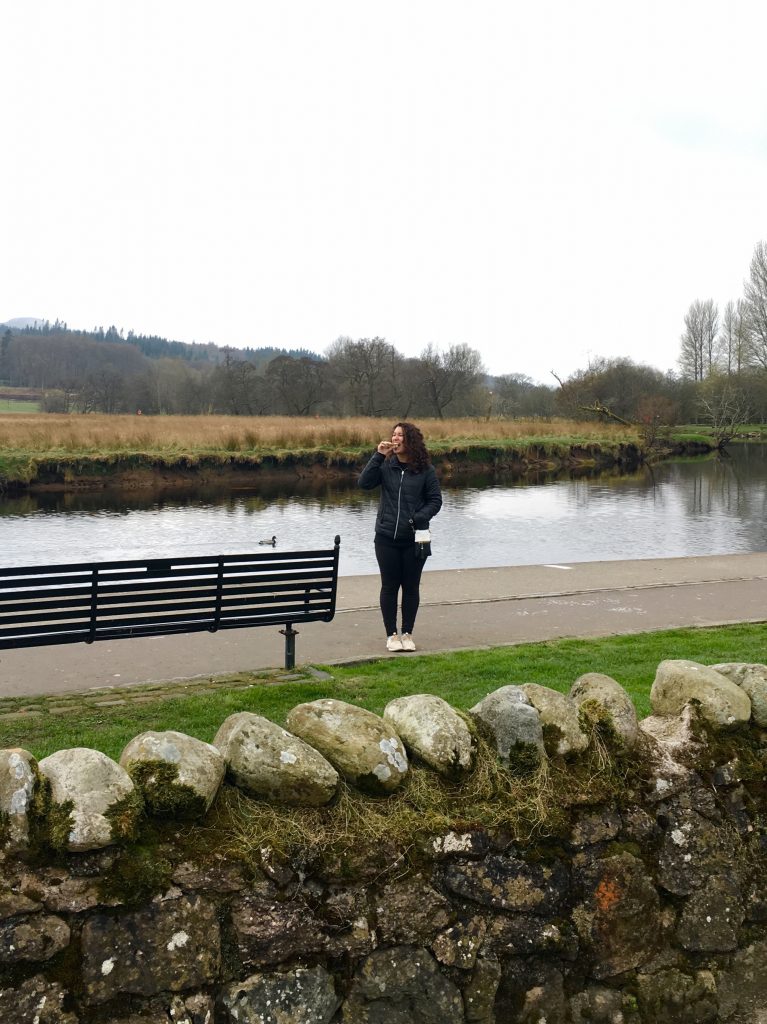 Me eating a pie in Callander, and a duck

As we continued unarmed into the Highlands, we stopped at Callander for quick pit & pie stop. Mhor Bread, “best pie shop in the Highlands” as Douglas says, served us the pie portion on the stop, and it was absolutely delicious. Mhor bread has an assortment of savory and sweet pies and after putting myself through the torture of just choosing one pie, I opted for a mini strawberry & rhubarb pie. It was delicious. (I know I said that already but it was worth saying again). Along with delicious pies, Callander is home to some beautiful walking trails, and serves as an entrance point to Loch Lomond and the Trossachs National Park where we continued our adventure. 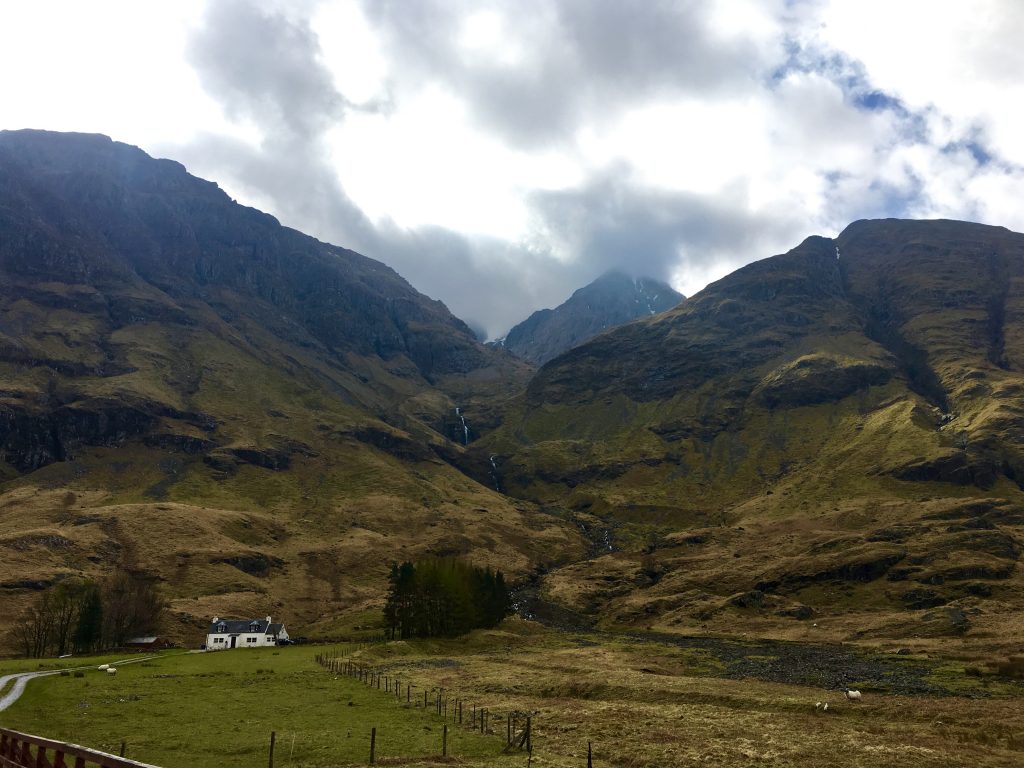 Farmstead in Ballachulish. Find the sheep!

Passing through the park gave us our first true taste of the Highlands. As we cruised along the roadway, stunning landscapes stretched out as far as the eye could see. We drove so close to the lochs it felt like sailing, and so close to mountains you had to wonder at the sheer size and power of a land collision that would create such magnificent formations. During this drive, Douglas introduced us to Scottish Gaelic music. Listening to traditional music in the place that inspired the notes truly transports you to different times. You’re thrust into the mindset of people that grew up on and with the land, and the landscape transforms in your mind. In the Highlands, the music made the land look wilder, more beautiful, and showed just how beauty and danger can balance in perfect harmony. For in a land where you have gorgeous steep mountain sides and deep dark lochs that shimmer with rare beams of sunlight, it’s easy to get lost in the beauty until you’re reminded that there are winds strong enough to toss a grown man right off that mountain side, and possible monsters waiting beneath the waves. (Loch Ness coming right up!) The music conveyed a respect and partnership with the surrounding lands, showing that wild lands create wilder people with wildly impressive bagpipe playing skills. 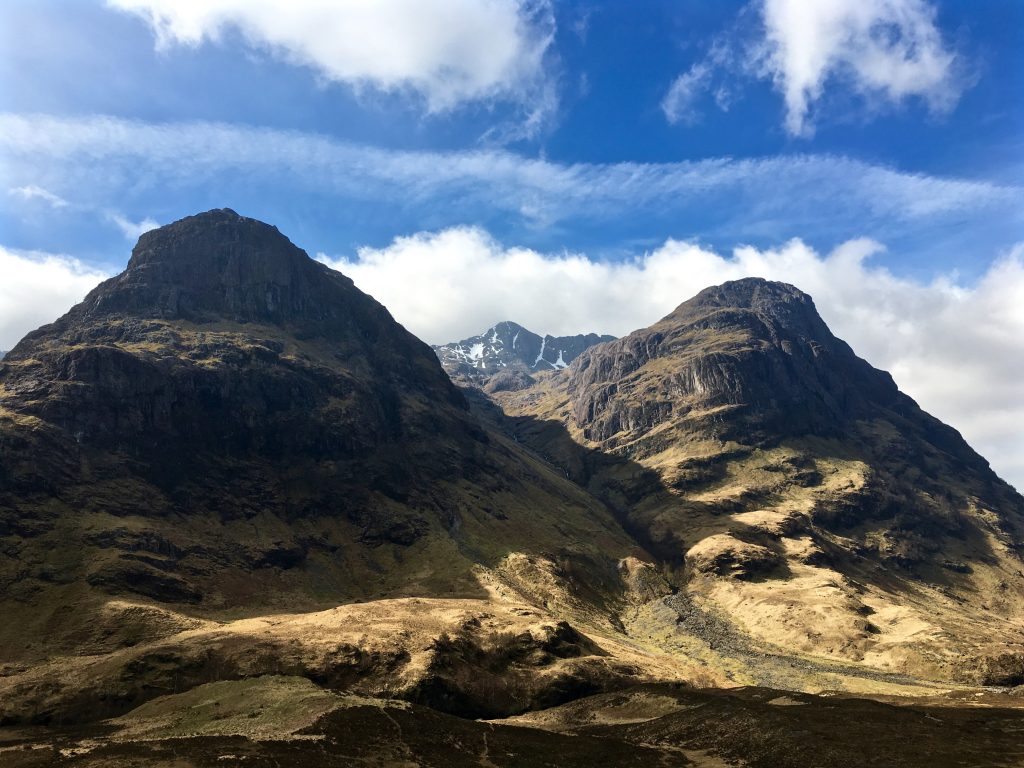 Once we left the national park, there was a short drive left to one of the largest (literally) stops on our trip. Glencoe is the valley and mountain combination you see in the picture above, which also happens to be the remnants of a super volcano. Fun fact, a super volcano is classified as a volcano with enough eruption power to cover 1,000 cubic kilometers. Just imagine how far ash and magma would travel outside of that! Glencoe is just one of the many magnificent formations along the Great Glen Fault line in Scotland. Other include Ben Nevis, and Loch Ness (dun dun dunnnn). 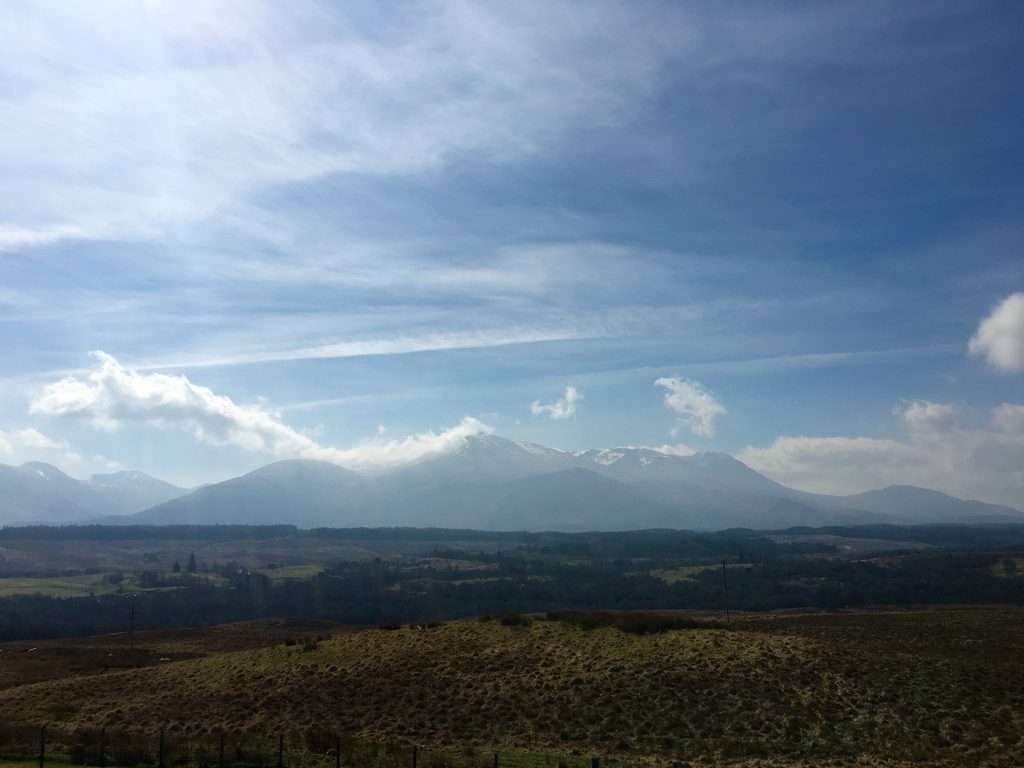 Ben Nevis, with the peak in the center gently brushed by clouds

Ben Nevis is another tall stunning mountain in the Scottish Highlands. So tall in fact, that the top is rarely seen uncovered by clouds (thanks partially to the wonderful Scottish weather). On our excursion, we got a wonderful view of the peak from the Commando Memorial, an area designed to remember a special group of forces who fought for and trained in the Highlands. Reportedly, they used real bullets during their training. Danger of bullet holes, paired with training in a deadly landscape, effectively ensuring only the toughest (and luckiest) of soldiers made it out to the battlefield, making them an unstoppable force. The location of the memorial, looking out to Ben Nevis, fits well with the legend of their training efforts. “Nevis” or “Nimheas” in Scottish Gaelic is translated either as “venom” or “beautiful”. I like to think that when the Highlands are concerned, “nimheas” has both meanings simultaneously, and I’d bet a few euro that many of the commando trainees would agree with me. 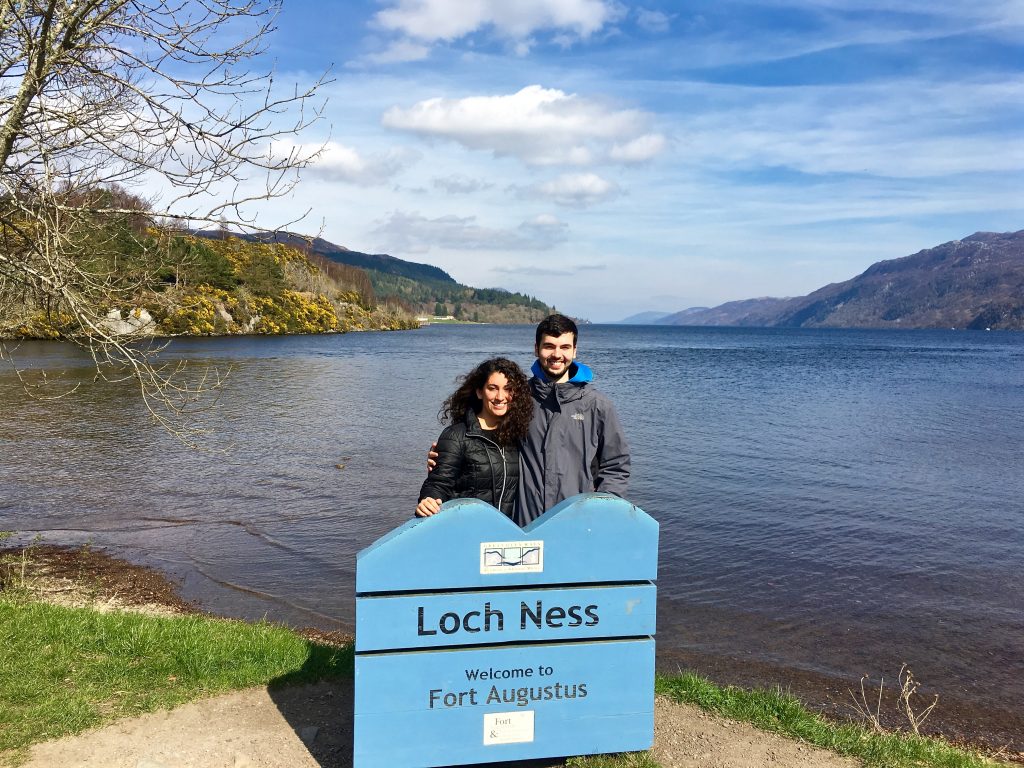 The moment you’ve all been waiting for and my personally-assigned rite of passage for the Highlands. Is Nessie real??

*Monkees’ I’m a Believer starts playing in the background*

To be the best detectives possible, we took a short cruise (that uses sonar!!) around the Loch. 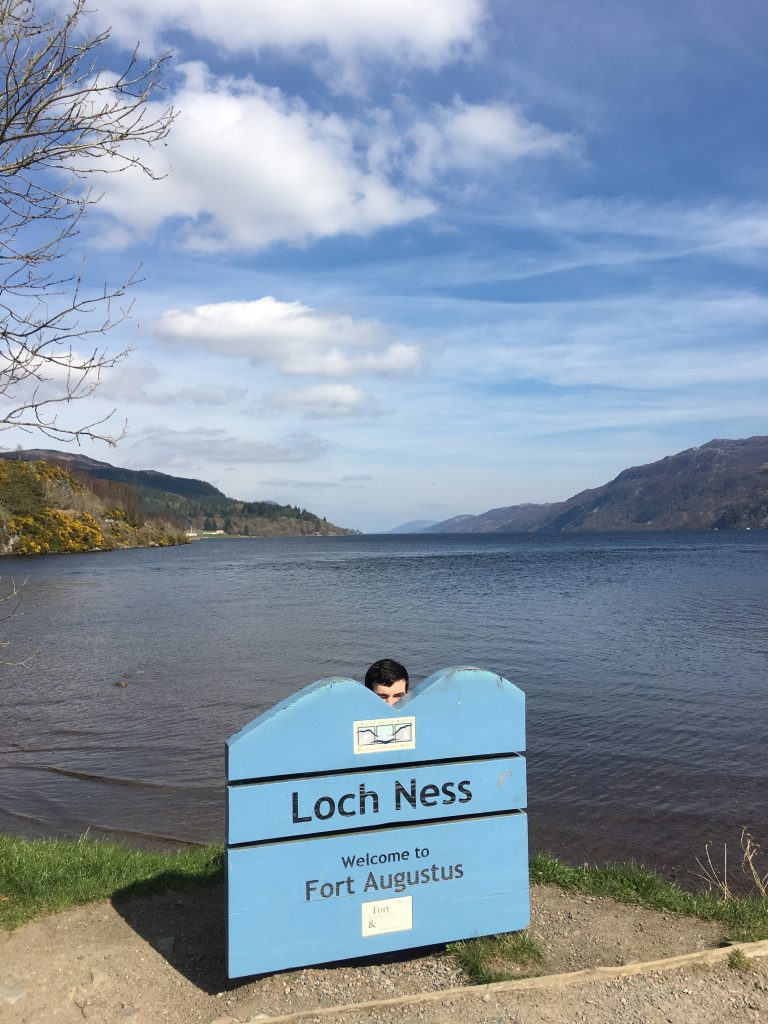 Thanks to some very large sonar dots, the skipper announcing 2 tons of fish disappear daily and no sediment is found on the bottom of the loch (meaning they’re not dying and falling down), and a few snifters of whisky that went down very easily, I’m proud to say that I give Nessie’s existence a solid “definitely possible.” 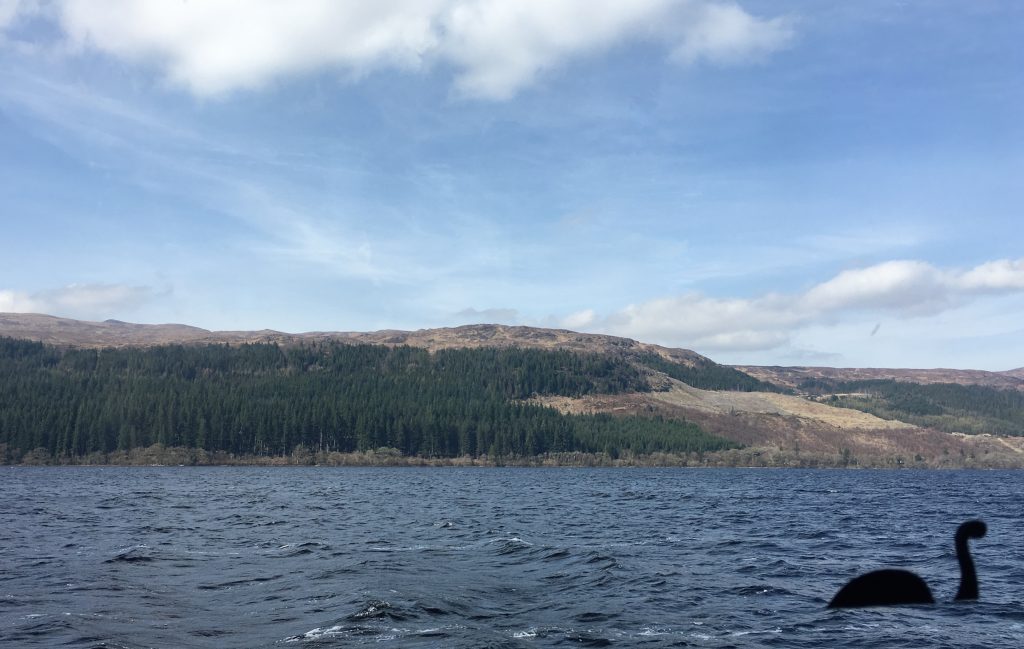 Mar sin leat from the Highlands!