While traveling nonstop, it’s important to stop and smell the roses when you get a chance! Alessio and I took a break after our drive across the Southwest to spend some quality time in Los Angeles. Here are our top 5 adventures in the huge city!

When in Southern California, see the beaches! Santa Monica beach is one of my very favorite, simple because of its sprawling size, fairly easy parking, and views of the mountains to the north. With a great boardwalk and a lively pier of shops, restaurants, and games, Santa Monica beach has all your summer needs in one place. Make sure to keep an eye out for churro vendors, browse the shops for souvenirs, and take the time to walk all the way to the end of the pier to see locals fishing and some sea lions! 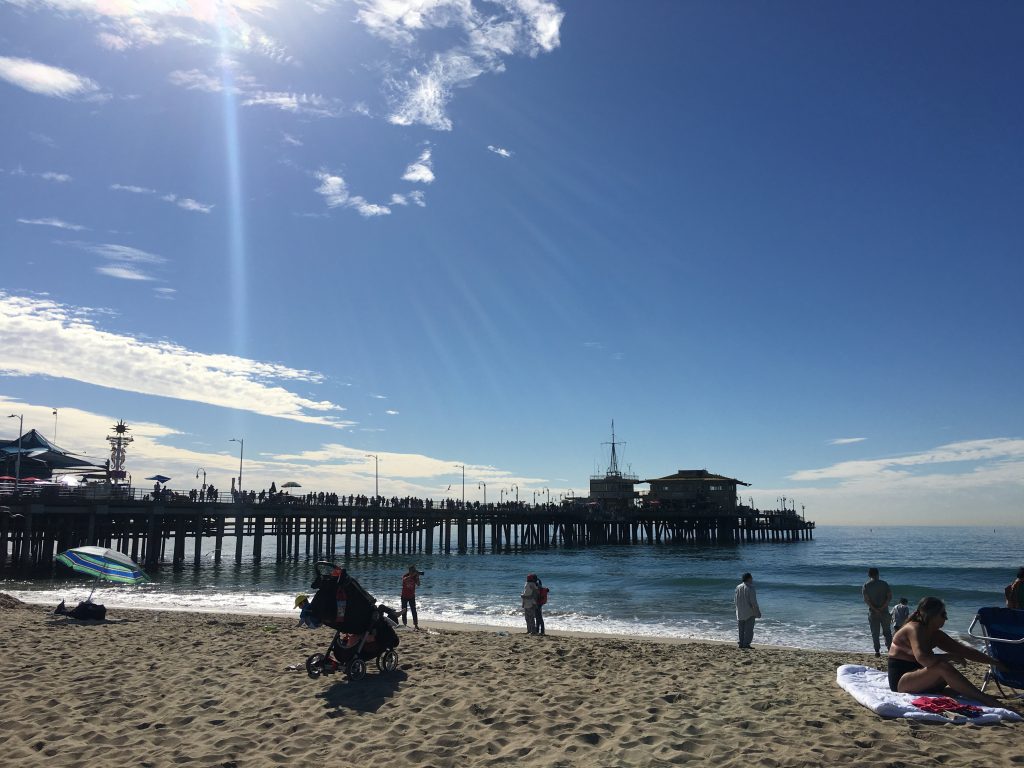 The Santa Monica Pier stretching out into the ocean

Venice beach, and various spots in Malibu are also a beach treat when visiting LA. When you head to Venice, take a long stroll along the boardwalk, keep an eye out for local artists, funky and sassy shops, and street art along the way. On your stroll, you’ll pass the Muscle Beach gym and the next-door basketball courts where you might just see some celebrities working out or NBA players playing ball! If you’re heading to Malibu, one of my favorite spots is El Matador State Beach. It’s a small beach compared to LA’s norm, but the bluffs and rock formations along the cozy cove are beautiful. You can frolic in the waves, relax on the sand, and explore some mini rock tunnels and caves while you’re at it! 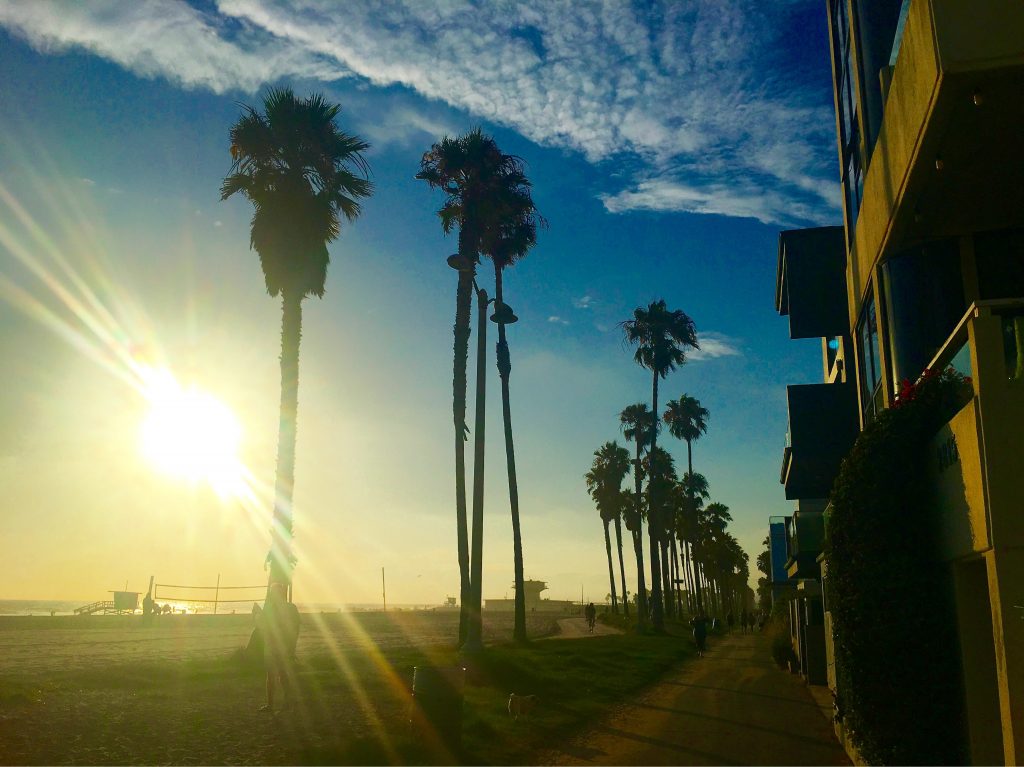 Sunset from the boardwalk on Venice Beach

Before this trip, I’d heard of Runyon park, never known the exact pronunciation (Run-Yun, according to my LA local friends), and thought of the park as a place that was a bit over hyped by celebrities and social media. Well, I must say I was proved very wrong! Runyon is a large park right smack in the middle of LA that can be anything from a nice stroll, to an exhilarating work out. With different routes both paved and unpaved cutting up and down the canyon, you’ll find yourself on a nice hike right in the middle of a city – a pretty cool experience! Pack lots of water, wear good sunscreen, and take the path right to the top of the peak for an amazing view of LA. Runyon Canyon is the perfect nature getaway within the city, and has a wonderful view that shows just how grand and sprawling LA is. 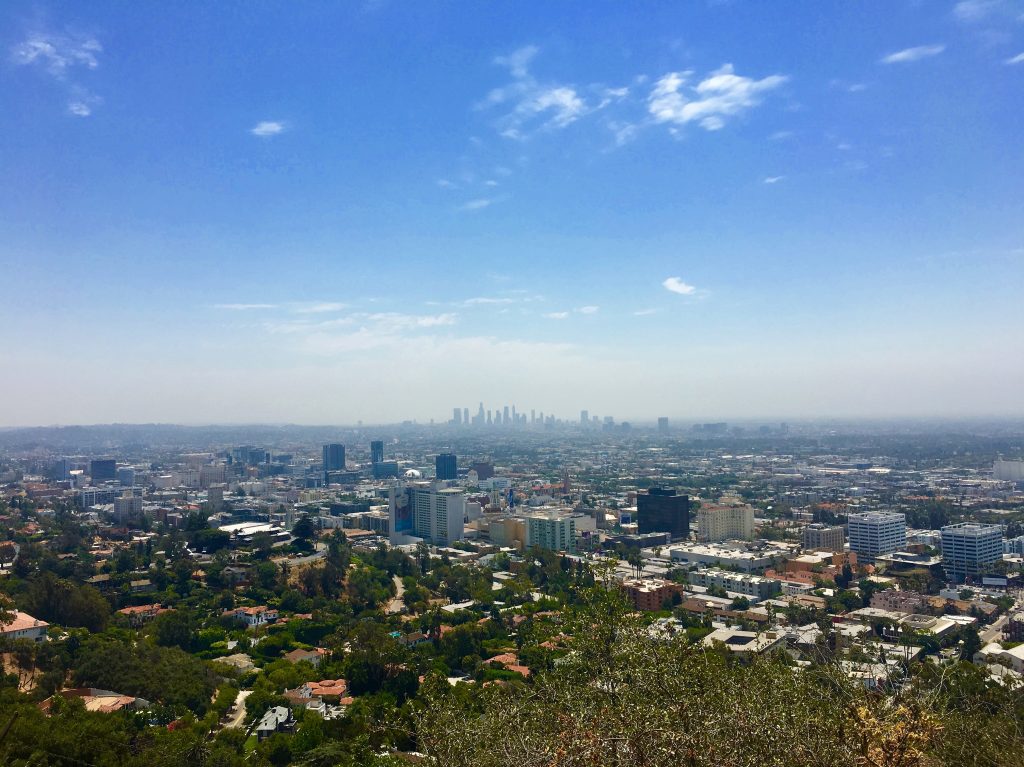 Although we tried to avoid going into the city areas of LA as much as possible (the constant traffic and crowds really aren’t a joke), we did spend some time on Melrose Avenue in West Hollywood and Hollywood. Melrose is a nice area for walking around, with lots of shops, cute restaurants, and best of all thrift and vintage stores! Most of the vintage stores are a quite an experience, and you’ll see some of the funkiest (and possibly most expensive) vintage gear around. Thrift stores like American Vintage (I’m only calling it thrift because the prices are very reasonable and thrift store worthy) are perfect to browse for some amazing finds. One of Alessio’s best purchases in LA was an old Allen Iverson Jersey he got for $3! Melrose is also right around the corner from the world-famous Pink’s Hotdog Stand, and while the line may be long, waiting to grab an authentic Hollywood dog might just be the perfect end to a thrifting day. 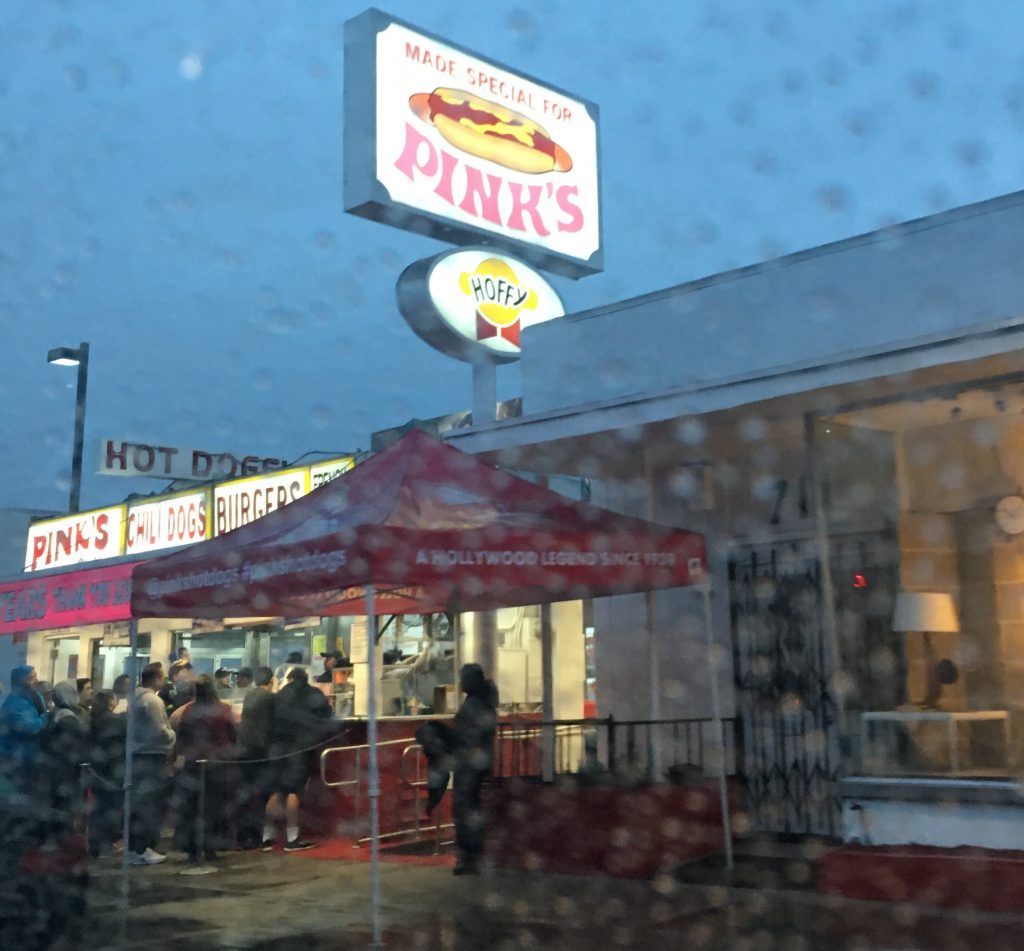 Even on one of LA’s rare rainy days, people flock to Pink’s for a delicious hot dog

Whenever our trips to a different city line up with sports games, we do our best to go. This time in LA, our adventure was timed perfectly for the Dodgers vs Atlanta Braves game. Dodgers’ Stadium is a set on top of a huge hill (with great views) just north of Downtown LA, which can be a bit of a hike up if you want free parking. Luckily for us, we did want free parking and on our walk up to the stadium we ran into a friendly local who had two extra tickets right behind first base! From our new awesome view, the game was a blast and we had the benefit of our new friend to chat with about the Dodgers’ and LA in general. If you’re planning on heading to a game, make sure to bring sunscreen with you! Especially during midday games, the strong LA sun touches a large amount of the stadium seats. We were a bit unprepared and ended up buying sunscreen during the game, thankfully it is sold in the gear and souvenir shops within the stadium! 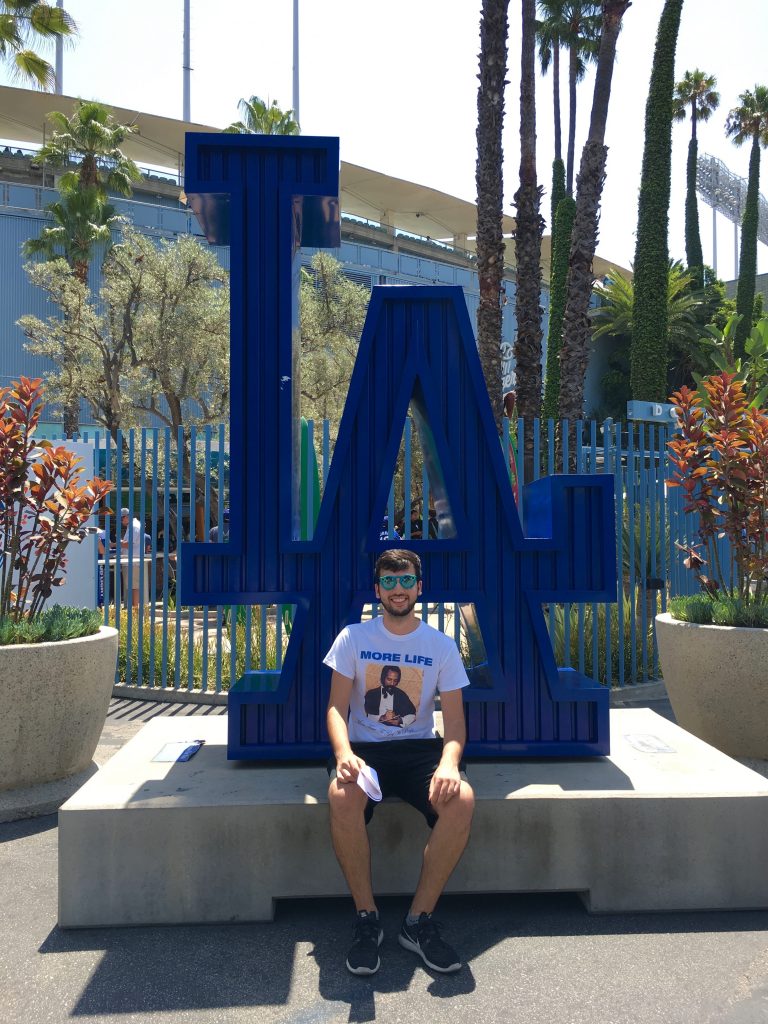 Hollywood is by far one of the most touristy experiences I had in LA, but hey when you’re being a tourist, why not act like one! Take time to wander through the crowds along the Walk of Fame and find your favorite celebrity in a star, before heading over to the Chinese Theater! The theater is a striking building from the outside and you’ll be entertained in the courtyard by everything from the ground to the top of the building. The cement ground is imprinted with the hands and feet of celebrities, as well as some great quotes (go Will Smith!) At night, there’s even a light show that plays on the structure of the building and will entertain you with Chinese dragons twirling along the walls.

To make the most of a Chinese Theater and Hollywood experience, Alessio and I highly suggest going to see a movie inside the theater! Inside, the building is a beautiful monument and museum of film and acting. Although tickets are pricey, the museum and experience of a movie within the city that is famous for its connection to film is worth the price. 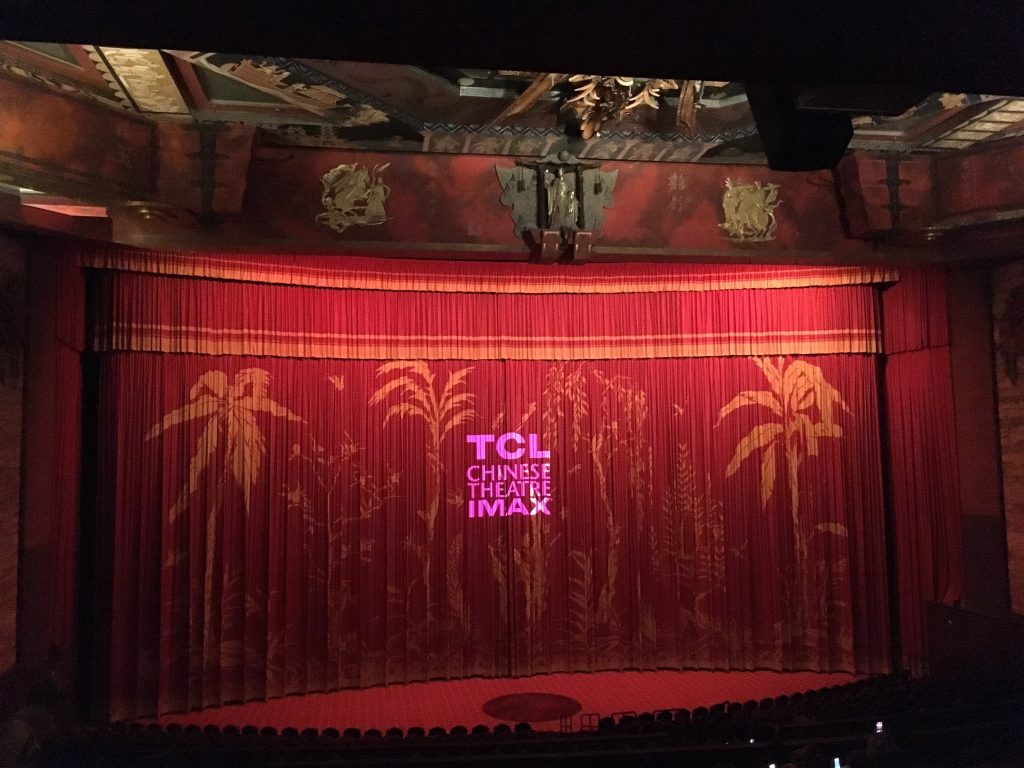 These five options just scrape the surface of Los Angeles, but if you’re a traveler like me who loves spending time by the ocean and only being a part time tourist, then these are a great start for spending quality time in the huge city! So, enjoy the beaches, do some unique shopping, and get a taste of what LA is all about!

Peace out from LA