This June, Alessio and I were lucky enough to be invited to Normandy for a friend’s wedding! We couldn’t resist turning it in to a long weekend trip and what an adventure it turned out to be.

In college, I just happened to end up living with a roommate from Paris. The first time I went to France, Alessio and I visited with her and her boyfriend. The second time I went to France it was for their wedding! Thanks, Marie-Ange for giving us the best reason to travel! The wedding was beautiful, a quaint outdoor ceremony on the grounds surrounding the stunning Chateau du Ronchay (grounds which included a bush with delicious raspberries); followed by a lively reception with food, lots of champagne, and my favorite, dancing! I was too busy having fun to take many pictures, but I manage to get one of their elegant, outdoor reception. 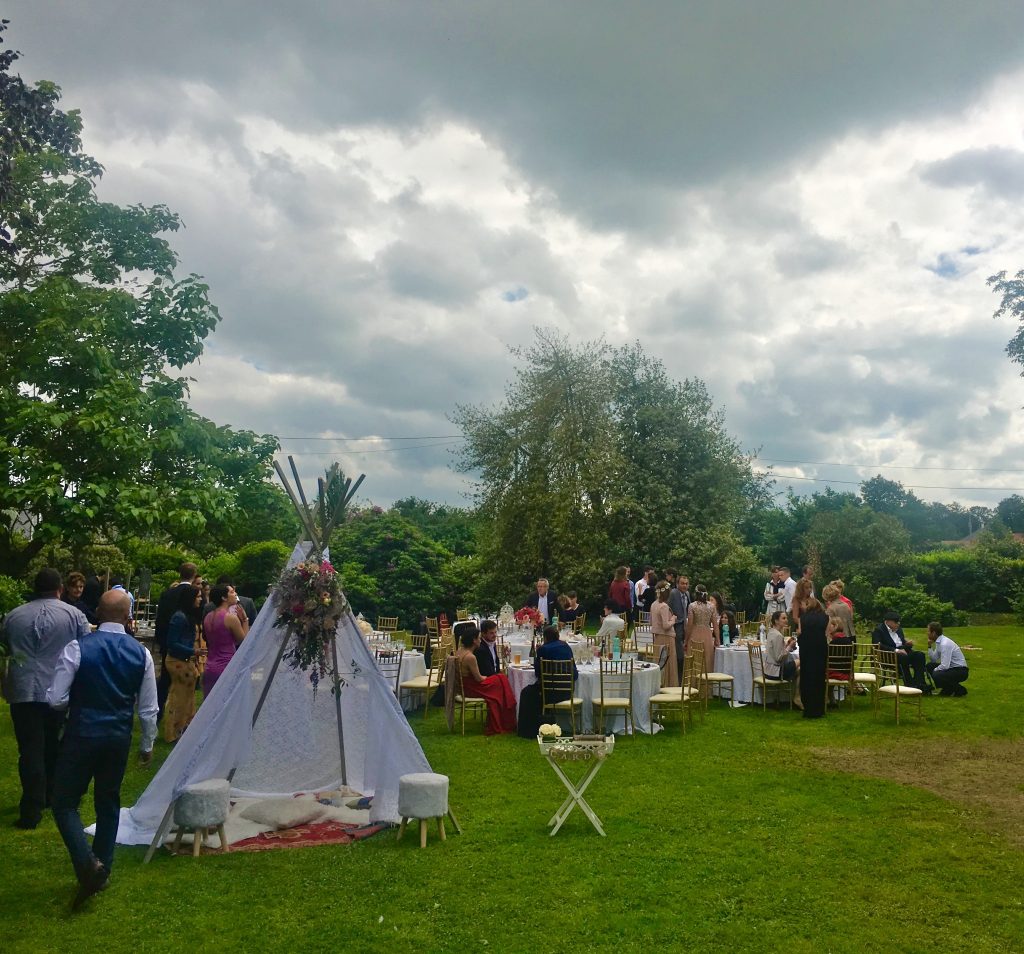 Marie and Luciano’s reception area in the Chateau’s yard

Seeing friends get married is always an incredible experience for me. You see them pour out their hearts in front of their friends and family, and it always seems as if they forget the surrounding people when they stand looking at each other. They’re transported into their own little bubble of love and amazement. That glowing intimacy is my very favorite thing about weddings.

At the reception, we met people from quite literally all over the world. A top travel suggestion they all agreed upon was that the city of Étretat should be visited. So, the day after, we hopped in our rental car and drove up to the coast of Normandy! Étretat is known for being an inspiration for impressionist painters like Monet, and as soon as we made it to the coast line it was abundantly clear why. The pebble beach contrasts the pale blue of the water perfectly. Ancient cliffs with interesting cutout formations stretch down the beach. Fun fact, the picture at the beginning of this article shows a part of the cliffs that Claude Monet painted in many pieces of his art including this one. One of the most amazing things was the sound the waves made as they crashed against the steep slope of pebbles on the beach. If you bring to mind the sound of a rainstick, magnify that 100x to a volume just short of a roar, then, add the calming swoosh of a wave. 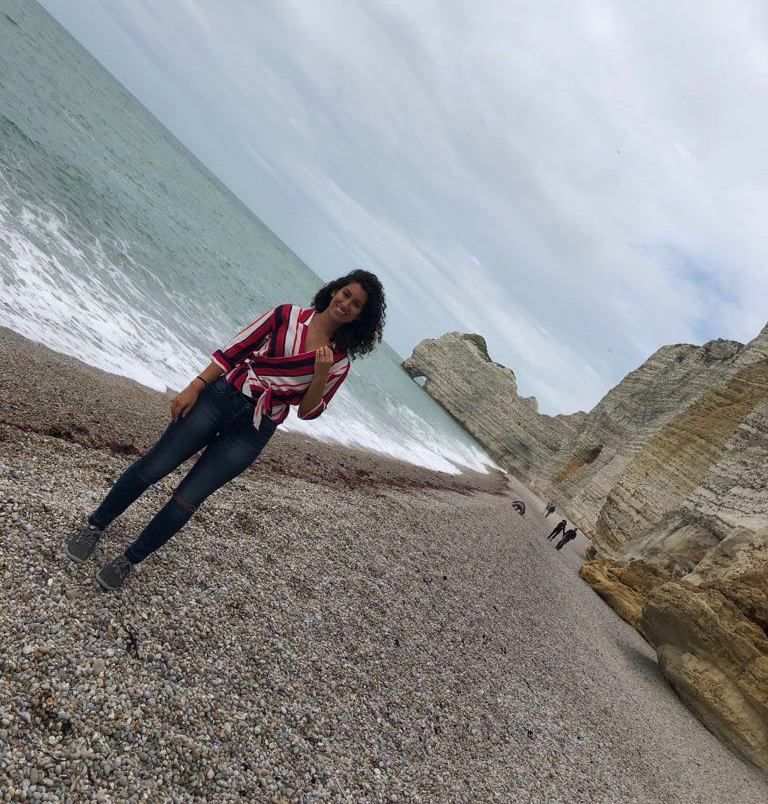 The beach of Étretat

After exploring the beach, we hiked up to the top of the cliffs where we found cows and history. A small chapel, the Chapelle Notre-Dame de la Gard, sits on top of the cliffs overlooking amazing views. The chapel looks ancient, but was actual rebuilt in the 1950’s after it was destroyed during the German occupation of the Normandy coast. Seeing the calm cows was a mood balm after thinking of the tough history that tore through this beautiful part of France. 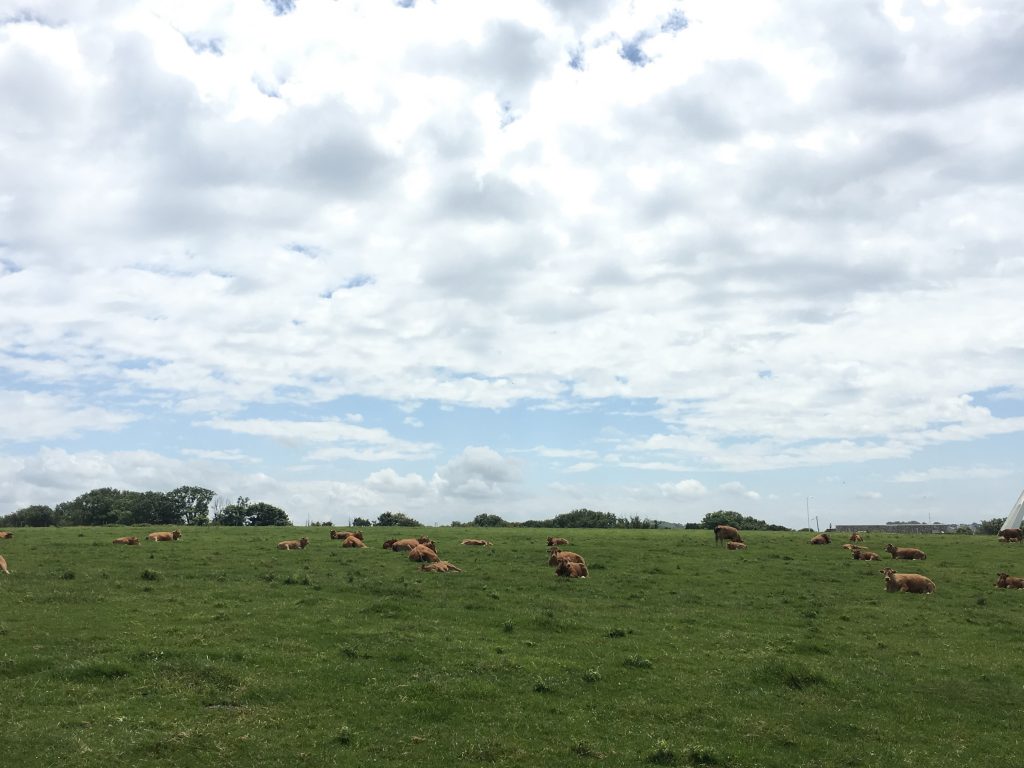 Cows on the cliffs above Étretat beach

On our last day, we left our little home in Normandy early so we could road trip our way back through some cities as we traveled to the airport. We stopped to walk around the city of Fecamp simply because it looked neat and was on the coastline. While wandering, we came across a beautiful building that looked half cathedral and half museum, so of course we had to go inside. You can imagine we were quite excited when we realized it was one third museum, one third monastery, and one third distillery. Completely by chance, we’d stumbled upon the famous Bénédictine distillery! We quickly got tickets for the next tour which began in the monastery’s museum area and included many beautiful paintings, manuscripts, and sculptures. Then, we were led on a guided tour through the distillery which finished with a sampling of the liqueur in the monastery’s tea room. 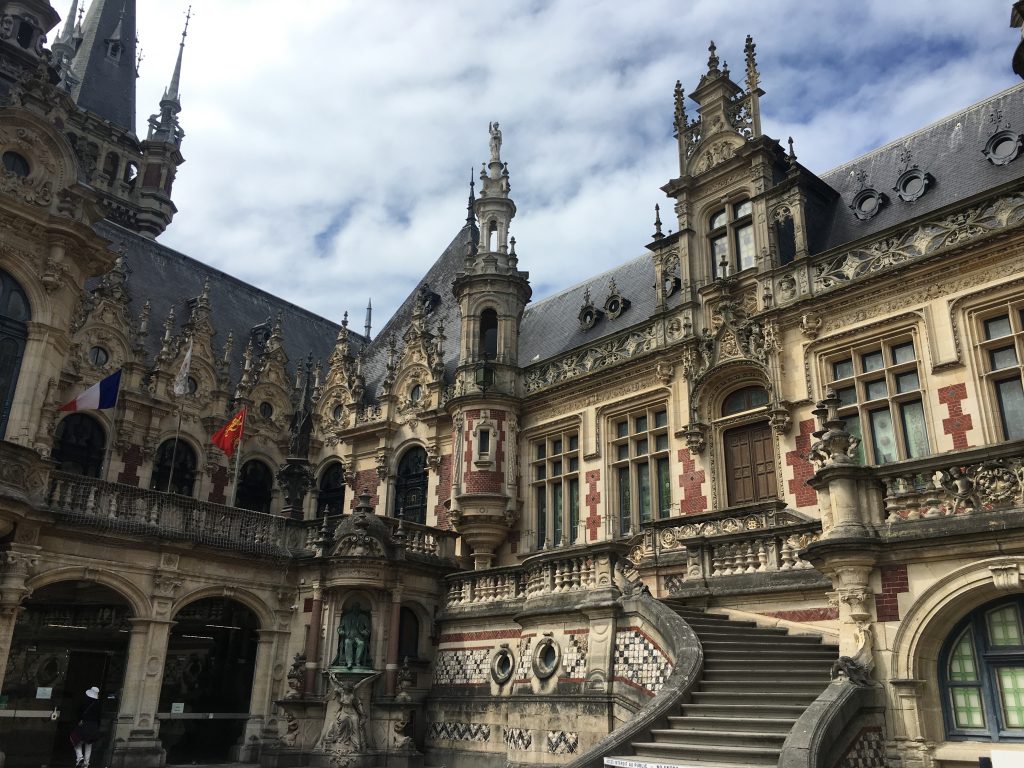 When we entered the distillery, the first stop was a huge room with an exhibit of all the publicly known spices and herbs that go into the liqueur. Legend has it that some of the ingredients are still secret, and only three people in the world know the true details. Out of the ingredients that were exposed, who would have thought that things such as fir cones and mysteriously labeled ‘red berries’ would go into the recipe for such a delicious drink. After touring through the room where the stills are kept, followed by an incredibly old cellar that looks as if it was carved out of stone, we were let out into an art gallery where the tasting was held. If you’ve never tried Bénédictine before, I highly suggest it mixed in a cocktail with grapefruit juice, or simple as a straight shot to sip. The flavor is strong, slightly sweet, a lot of herbal, and just downright yummy. 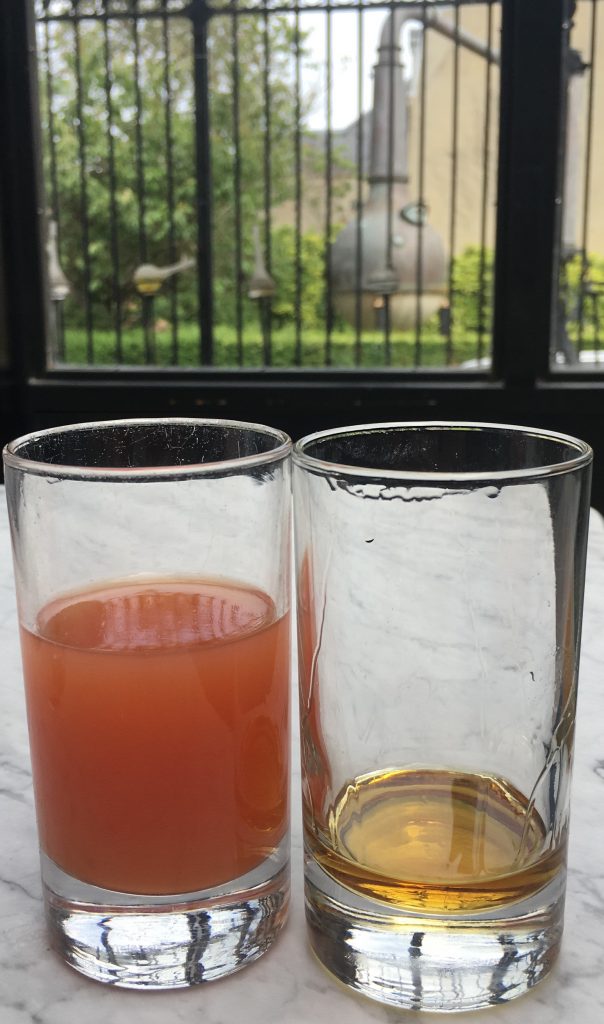 Grapefruit cocktail on the left, Single Cask on the right. If you look closely, you’ll see an old still on display across the street.

Our second short road trip stop was the city of Rouen, partially because we saw the tall cathedral in the distance, and because our wonderful hotel host had recommended a lunch spot owned by a friend of his. Walking the streets of Rouen felt like we’d slipped back into an old movie based in France, except this time with the addition of street art depicting Joan of Arc. The cathedral was like a smaller Sagrada Familia, with similar amazingly intricate stone work towering overhead. We didn’t get to go in, but walking around was completely satisfying especially as we got to see the general layout of the town and how it moved out from the cathedral. Our lunch recommendation turned out to be a treat as well! If you’re in Normandy, I highly suggest anything with smoked salmon, everywhere we ate it, it was superb. 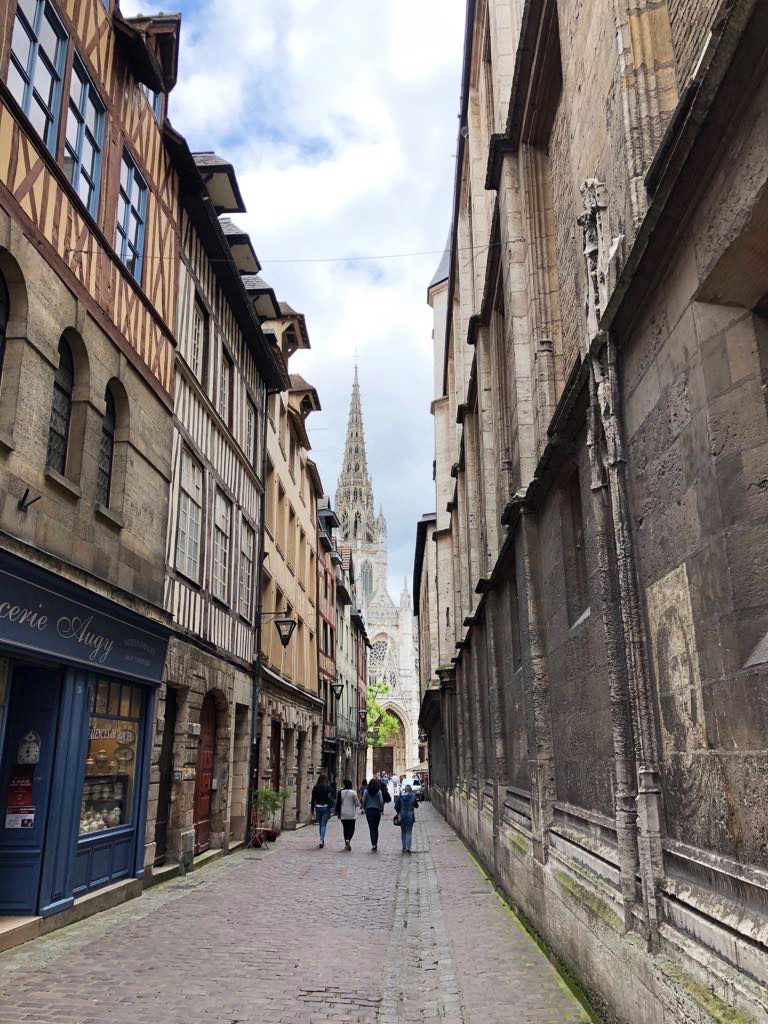 Street art, colorful shops, and the Rouen Cathedral in the distance

Our speedy weekend traversing Normandy ended at an airport bar with the World Cup on the screen, a perfect ended considering France went on to secure the cup!

With a big congratulations to Marie-Ange & Luciano!